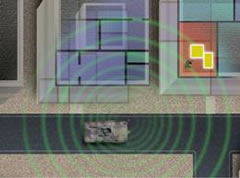 Recognizing the need to model, and understand the internal structure of a building prior to an operation indoors, DARPA is developing tools and capabilities for external sensing, deep inside buildings, gaining a detailed situational understand, both above- and below-ground. Such a capability could provide an essential planning tool, as well as invaluable ISR capability, processing and providing live updates during mission execution.

One such DARPA program is VisiBuilding – an urban sensing and planning tool capable to determe building layouts, find anomalous quantities of materials and locate people within the building. To achieve these goals, VisiBuilding could exploit phenomenology of signal penetration into buildings, measuring propagation and backscatter off urban structures. The system will utilize various means to position and monitor sensors in the vicinity of the objective, gaining an insight about the building, developing hypothesized ‘best guess’ model of theinternal layout of rooms, walls and utility infrastructure that best fits the available sensor data. 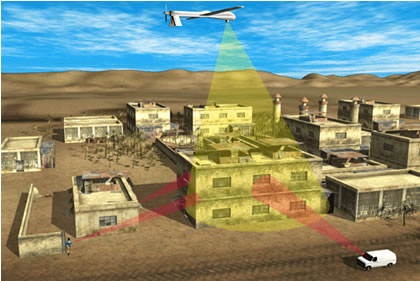 Another program recently launched at DARPA is ‘Harnessing Infrastructure for Building Reconnaissance’ (HIBR), a capability that translates VisiBuilding into practical terms: DARPA believes that ‘opportunistic sensing’ could be a practical approach to ‘guess’ such interior structure, using exterior observations. Information could be gathered from geometrical and stimulus response (for example, seismic or acoustic vibrations performing a sonar effect). Such stimulus could uncover minute details that, when processed, could provdie tactically useful information, for example, ad-hoc mapping of structural, electrical, plumbing, and ventilation systems.

Other capabilities, such as wall penetrating ‘vision’ could be handy. Such capabilities are provided by ‘wall penetrating radar’, the latest models being compact, hand held devices. The British company Cambridge Consultants has demonstrated ‘vision through the wall’ capability utilizing mobile x-ray vision. A similar technology is already available from the Israeli company Camero, offering the Xaver 400 hand-held radar, capable of penetrating concrete, reinforced concrete, cinder block, brick, stucco, adobe, drywall and other common wall types, with a range of up to eight meters (26ft). A larger version, Xaver 800 can penetrate multiple walls up to a distance of 20 meters. The device presents the operator with an easy to read display indicating the location and number of people behind a wall or barrier. Xaver is being evaluated as part of the gear for Israel’s future infantry urban combat team.

An even smaller, hand held device is the RadarScope developed for DARPA. This system weighs less than 1.5 pounds and runs on AA batteries. It allows security forces to sense through nonmetallic walls, such as concrete, to determine if someone is hiding inside a building or behind a wall. Recent tests conducted by the U.S. Army demonstrated that the Radar Scope was successful at detecting a person hiding behind concrete and adobe walls. In 2008 DARPA has deployed 50 Radarscopes to the Army, Marines, and others for evaluation in-theater.