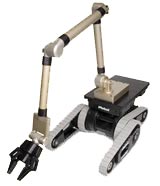 iROBOT, the developer and producer of the PacBot, demonstrated a model of the Small UGV (SUGV) currently under development for the US Army Future Combat Systems (FCS) program. The SUGV will weigh around 10 kg (20 pounds), compared with 22kg (48 pounds) of the current PacBot. It will carry a payload weight of about 3 kg, utilizing multiple payloads, utilizing “plug-and-play” architecture. This man-portable SUGV will feature tele-operated control or autonomous operation, supported by ad-hoc communications to establish swarm operation by grouping several SUGVs together on a single mission. The new SUGV will offer higher durability, withstanding being tossed through a window or thrown from an upper floor. Equipped with mission specific modules, SUGVs will be configured to conduct military operations in urban terrain, including tunnels, sewers, and caves, assisting warfighters tasked with manpower intensive or high-risk functions without exposing Soldiers directly to the hazard. (i.e. urban Intelligence, Surveillance, and Reconnaissance (ISR) missions, chemical/Toxic Industrial Chemicals (TIC)/Toxic Industrial Materials (TIM), reconnaissance, etc.)

At AUSA 2008 iRobot launched its family of SUGV 300 robots, based on the SUGV. A member of this new family, the SUGV320 is the robot designated for the future FCS mission (SUGV) while other versions are being produced for near term fielding, as part of the first ‘Spinout’ of the FS program. Among these are the SUGV300 designed as a basic reconnaissance lightweight robot and the SUGV310, designed for dismounted EOD missions. The ‘300 is the basic platform, without payloads, weighing only 25 lbs (11.3 kg). All the SUGV300 family robots fit into the soldier’s backpack (MOLLE) or ALICE packs, and are powered by standard BB-2590/U batteries for more than six hours of operation.

iROBOT also released develops a larger platform called NEOMover – 150 kg platform, carrying a payload of 100kg (200 pounds). The new robot will follow the design principles of the smaller PacBot (including the characteristic tracks and flippers design). NEOmover will be more durable and robust, NEOMover will be capable of climbing steps and obstacles, drop from a one storey high rooftop and endure harsh environmental conditions.