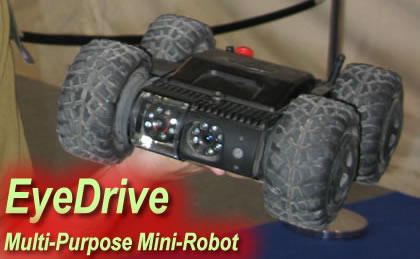 An example for a matured miniature robotic platform fully adapted to the urban, indoor and subterranean environment is the EyeDrive, developed by ODF.

Leveraging panoramic video technologies developed for the Eyeball, ODF has created a mini-robot called Eyedrive, which utilizes autonomous movement, 360 degree vision, and the ability to mount lightweight precision weapon to ‘instinctively’ eliminate targets upon command. Similar to a miniature unmanned aerial vehicle, Eyedrive is guidedutilizing a patented ‘sensor guidance mode’ called ‘point and Go’, where the operator points to an object of interest and the robot moves to this direction. It also has built-in navigation and patrol modes that enable a robotic team to work in unison, seeking contact with the target as quickly as possible, thus doubling, even tripling indoor reconnaissance capacity by employing multiple vehicles from a single control unit. 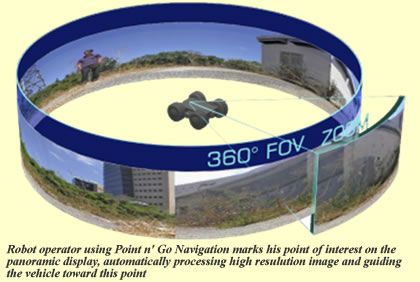 One of the proposed payloads for the EyeDrive is a hopping mechanism, enabling the miniature robot to negotiate obstacles over one meter in height, by hopping over them. A similar concept is currently underway at DARPA, is designed to negotiate urban obstacles by hopping above the obstacle. DARPA experts considers that hopping mobility can be shown to be much more efficient than hovering for obstacles at heights less than or equal to a few meters. The proposed hopping robot would be truly multi-functional in that it will negotiate all aspects of the urban battlefield to deliver payloads to non-line-of-sight areas with precision. 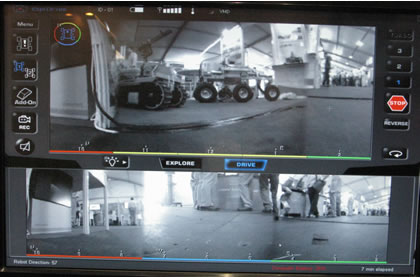 The EyeDrive will also be able to carry lethal or non lethal payloads, drop communications relays and unattended passive sensors to monitor hostile activity, or even deploy ‘eyeball’ sensors to

dominate primary locations. ODF, in cooperation with Rafael are developing a lethal configuration for the EyeDrive, where the robot could carry up to 16 miniature rockets, capable of eliminating human target from a distance of 30 meters. Four rockets contained in a quad launcher weigh only 280 grams. Each rocket measures 8 millimeter in diameter, and carries a warhead weighing 40 grams. The robot can carry up to four such launchers, with associating target acquisition and control systems, or any combination of launchers and sensors to match specific missions. The weapons are aimed utilizing a target marker coupled with the vehicle’s ‘Point and Go’ navigation system, assuming some of the roles previously performed by trained dogs.

While a scene of rocket packed mini-robots roaming inside a building monitored the comfort of a nearby van is a bit extreme, SWAT and CT teams are already being assisted by mini-robots on their daily operations. By gaining experience and confidence with unmanned recce missions, weaponized platforms could soon be utilized as an integral element of the assault team.