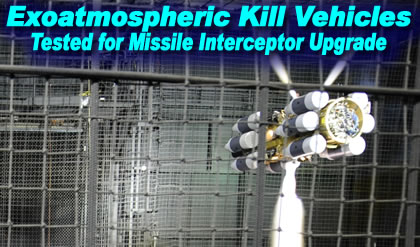 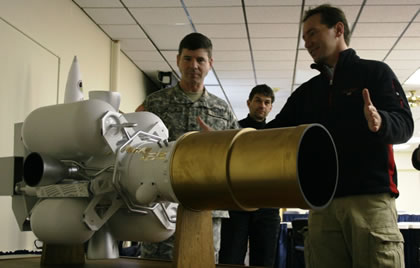 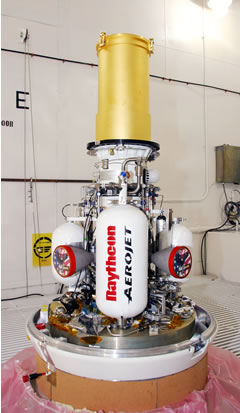 This brief description gives only a taste of the complex process involving sensors deployed over half the globe, guiding a small spacecraft that rapidly acquires its own location by tracking the stars, track a hostile targets flying at a closing speed of 18,000 miles per hour and home in for a direct impact.

GMD is designed as an interceptor of intermediate- and long-range ballistic missile, killing the targets in the midcourse phase of their flight, while they are arching in the “exoatmosphere” – the region of space just outside the Earth’s atmosphere. The most visible element of the system is the GMD missile interceptor, built by Boeing. This 54-foot-6-inch missile is merely the booster, lifting the EKV into space. This 152-pound “smart bullet” is equipped with thrusters that steer it into the path of the oncoming warhead, to destroy it by the kinetic energy released on impact. The U.S. military has 24 ground-interceptors in silos in Alaska and California, and 21 sea-based interceptors.

The EKV is designed to intercept medium and long range missiles fitted with a single warhead, discriminating the target from countermeasures. In order to meet more advanced missile threats, fitted with multiple warheads and decoys, advanced kill vehicles known as Multiple Kill Vehicle (MKV) are being developed. During an actual hostile ballistic missile attack, the carrier vehicle with its cargo of small kill vehicles will maneuver into the path of an enemy missile, similar to EKV. MDA is probing two different approaches to multiple threat intercept.

Two parralel approaches are being pursued – the MKV-L, employing a carrier ‘bus’ equipped with sensors and guidance, that releases and guides small kill vehicles at the targets. Using tracking data from the Ballistic Missile Defense System and its own seeker, a single the carrier vehicle will dispense and guide multiple kill vehicles to destroy any warheads or countermeasures. A different approach is MKV-R, employing multiple kill vehicles operating in an integrated ‘mesh’, each equipped with its own sensor, guidance and communications. One of the KVs assumes the role of ‘play maker’ while the others follow its commands.

A full-scale prototype Multiple Kill Vehicle (MKV-L) was recently demonstrated on a test at Edwards AFB. Through the test the MKV 23 foot (7 meter) large vehicle flew for about 20 seconds, maneuvering while simultaneously tracking a target. “This test demonstrated the integrated operation of the MKV-L in near-earth flight,” said Rick Reginato, Multiple Kill Vehicle program director, at Lockheed Martin Space Systems Company. “This represents a major step forward for the earliest operational payload designed to destroy multiple threat objects with a single missile defense interceptor.” The test was the first of several to prove MKV readiness for complex flight testing aboard the Ballistic Missile Defense System’s ground-based interceptor currently deployed in Alaska and Southern California.