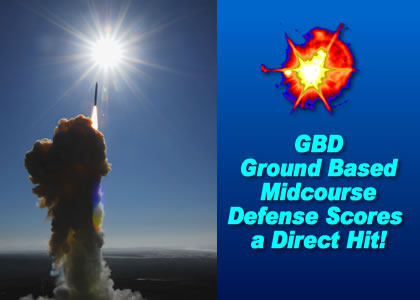 Recent testing activities conducted by the U.S. Missile Defense Agency (MDA) culminated a busy year that marked substantial progress in the development of credible U.S. missile protection, both for tactical and strategic applications.


Among the latest technologies being demonstrated by the program were advanced stages of the high power airborne laser and exo-atmospheric multiple kill vehicle and, a full demonstration of the currently operational capabilities – the sea based AEGIS system and Ground-based Midcourse Defense (GMD). The most recent test was performed December 5, 2008 demonstrating the entire system, including interceptors, sensor and battle management.

This test represented a North Korean long range missile targeting the Northwest region of the United States. The test vehicle was a target missile replicating an enemy missile while the interceptors used existing missile defense systems that are currently deployed and operational today. For the sensors, the battle management, interceptor to the soldiers, manning the consoles that tracked, discriminated and terminated, the target was the same. In addition, two ballistic missile intercept capable U.S.Aegis ship were involved, as they would be stationed, in the Sea of Japan in case of a North Korean missile attack. This was the first time the Defense Missile Agency has synchronized its network of varied sensor types and frequencies to successfully track, report and intercept a single target.

The intercept was performed by the Alaska based 49th Missile Defense Battalion, 100th missile defense brigade, based at Fort Greely, with Battle Management Command and Control performed centrally at Colorado Springs at Shriver Air Force Base where management and integration of the intercept would be performed, in realistic scenarios. The test combined an early warning radar system south of Sacramento, Calif., a mobile radar system temporarily posted in Juneau, Alaska, with two AEGIS ballistic missile defense ships, off the Pacific coast and a sea-based radar system.

“The core of our missile defense system is the fact that we can operate in layers and have multiple systems working together,” explained Army Lt. Gen. Patrick J. O’Reilly, “The key to our protection and the effectiveness of the systems is to have all of these different sensors simultaneously tracking, and the system [knowing] exactly that it’s not multiple objects, it’s one object up there. What we showed today, is all those sensors working together,” he said. “At any one time, the system knew which sensor was reporting … and tracking it and it gave the warfighter a presentation of the target. It is the first time we have ever done that in an actual test and with our soldiers [and sailors and airmen] operating it.”

The scenario was planned to be even more challenging, with the target-missile deploying multiple decoys, further complicating target-tracking and identification. Countermeasures could include the missile deploying chaff, decoys or replicas. While the system is designed to overcome such challenge, in this case, the target missile failed to deploy the decoys, thus leaving the demonstration of decoy and counter-countermeasures to future tests.

“Countermeasures are very difficult to deploy,” O’Reilly said. “We have had trouble deploying them in the past.” Even though countermeasures didn’t deploy, the upper stage of the mock enemy missile was still in the area. “The interceptor saw two objects and had to understand the data sent from the sensors to discern which object to hit”, O’Reilly said.

The following video prepared by Northrp Grumman outlines some of the technologies employed for ballistic missile defense in a fictitious scenario. (although the systems shown are not the ones used with GMD system):