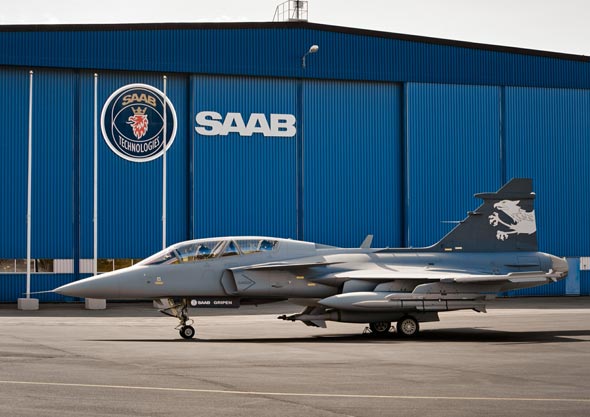 Saab, the developer of the Gripen is preparing a technology demonstrator known as ‘Gripen demo’, to be developed by an industry team led by Saab, and include General Electric and Volvo, Honeywell, Rockwell Collins, APPH, martin Baker and Terma. Saab is seeking to expand he program to include more partners, thus strengthening it particularly in its export markets. The Gripen Demonstrator will be based on a new Gripen test flying platform and avionics rig to be called “Gripen Demo”.

The aircraft will be equipped with a Volvo derivative of the GE F414-GE400 engine, currently powering the F/A-18E/F Super Hornet. The new engine will offer 35% more thrust, translated to increased range, better performance and increased weapons and stores carrying capability which, in turn will necessitate a new landing gear, to be modified by APPH of the BBA Aviation company. The new engine is more reliable than the F404 predecessor. Gripen’s new avionics suite will include an AESA radar – the specific type has not been determined yet. Other avionics include flight management computers, switching and data transfer units, video processors, head-up display and cockpit displays all to be delivered by Rockwell Collins.

Although Gripen Demo is a private initiative financed by the industry team, part of the expenses is backed by government commitments. In April 2007 Norway committed some US$25 million for future development of the Gripen. The Swedish government is also expected to make a decision soon.

The 100,000 flight hour mark recorded by the Gripen fleet last week also highlighted the flawless operation of its engine the Volvo RM-12 (a modified GE 404). Accroding to Volvo’s records, these 100,000 hours was surpassed without a single engine-related accident or incident. Since fielding the first RM12s in the 1980s, Volvo introduced many improvements in the engine, reducing operating costs and improving safety. These include a redesigned intake and improved afterburner flameholder which reduced maintenance overhead, and an FADEC (Full Authority Digital Electronic Control) system that optimizes operations, provides the possibility to reduce fuel consumption and is simultaneously used for trouble-shooting. Gripens are currently flying with the Swedish Air Force, Hungary, Czech Republic, South Africa and in the UK, where they are used for pilot training. Thailand will soon join as a sixth Gripen operator worldwide. In March, the first Gripen aircraft will be placed in active service in South Africa.