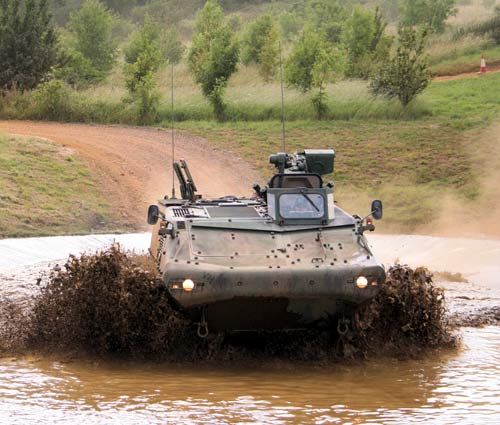 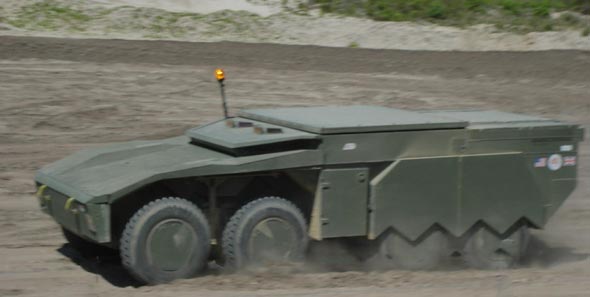 Following disagreement about the ownership of the Piranha V design, between the UK MOD and General Dynamics UK, which was selected to supply the FRES-UV program, this phase of the FRES program was postponed to an indefined date.

The overall program was one of the most ambitious British Armor programs in recent years. The total fleet of Future Rapid Effect Systems (FRES) included about 3,775 vehicles ultimatley replacing many aging vehicles currently in service. While FRES wais expected to be operational by 2012, phasing-out of current models such as CVR(T), FV 430 family APCs and the Saxon is not expected before 2020. FRES is the largest ever British Army program with an acquisition value of around £16 billion, and through life costs of £60 billion.

FRES the most significant armored vehicle project for the British Army for the next decade. Comprised of a family of medium-weight, armored fighting vehicles, FRES will fulfill a wide range of roles. FRES will be an integral part of an interoperable network enabled concept currently developed for the British Army and NATO and coalition forces in general. The specific selection of FRES derivative is yet to be determined, after the conclusion of the FRES assessment phase.

At present, FRES system house Atkins contracted several risk-reduction technology demonstration contracts, concluded by 2007, in time for the “Main Gate” evaluation of the system’s design, costs, and risks. As part of this process, General Dynamics demonstrated its Advanced Hybrid Electric Demonstrator vehicle (AHED) for future consideration of such technology for FRES applications. BAE Systems Hagglunds submited an 8×8 version of its SEP vehicle for similar testing. Two additional Technology Demonstration Programs (TDP) contracts were awarded to Lockheed Martin and Thales, for the technology demonstration of the future vehicle’s electronic architecture. Other risk reduction programs are underway with Dstl, for Capacity and Stowage design and with Akers Krutbruk of Sweden, for the evaluation of Hard Kill Defensive Aids Suites (HKDAS).

Other TDPs will is also focus on the survivability issues including a demonstration of the vehicle’s integrated survivability suite, which will include, apart from HKDAS, an Electric-Armor concept and collective, regenerative CBRN system.

Currently, the program focus on early deployment of FRES in the ‘Utility Version’, an 8×8 wheeled vehicle to be used for a variety of combat and combat support roles. Three vehicles are currently considered – all of them foreign made – The German/Dutch Boxer, the French VBCI and Swiss made Piranha V. 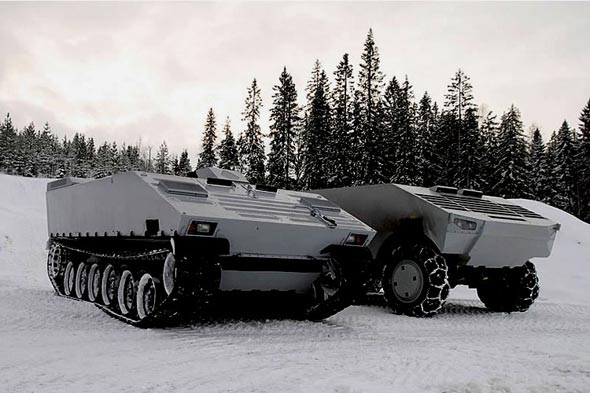 An advanced Electronic Architecture (EA) is being developed for FRES vehicles will be key to their future integration into the network enabled combat forces. Different concepts were evaluated, considering future network enabled communications integration and enhancement of Command and Control, Communications and Intelligence (C4I) capabilities. EA will feature situational awareness at the platform and unit level, target acquisition and precision engagement, survivability and mobility. Any future EA will certainly integrate the Bowman communications system and be interoperable with existing systems, for combat, combat support and combat service support systems communications. In October 2007 Thales UK and Boeing (through its Boeing Defence UK subsidiary) were selected to lead the FRES System of Systems Integration (SOSI). The competing Lockheed Martin led team included Smiths, SciSys and Ultra Electronics. Thales’ team included BAE Systems, as a strategic partner, and QuinetiQ.
EA will be based on an open architecture, compliant with current and emerging MoD Standards including the Bowman Combat Infrastructure (CIP) and the Platform – Battlefield Information Systems Application (BCIP) program. A sophisticated Health and Usage Monitoring System (HUMS) will be a key element to reduce the logistical footprint, increase availability and ensure that the whole life cost for the FRES system is tightly controlled. Other studies will address commonality and scalability across FRES roles, mission-specific reconfiguration, and through-life growth by incremental acquisition.
As part of the Chassis Concept Technology Demonstrator Program (CC TDP), Atkins contracted General Dynamics to demonstrate the readiness of electric drive technology, enabling better understanding of the challenges of integrating potential electronic architecture solutions onto future FRES vehicle chassis. Under the 18-month FRES CC TDP program, GD will demonstrate its in-hub electric-drive and its ability to meet the FRES platform requirements, as well as the integration of the Electronic Architecture (EA) into the chassis. AHED was originally designed as a 16 ton chassis but through the development program it is expected to grow up to 20 ton, to fit the entire range of FRES derivatives. AHED has advanced through several test phases in recent years, accumulating over 4,200 km of road and cross-country testing. By the end of the FRES evaluation phase, AHED is expected to log over 12,000 km. AHED’s interchangeable modular in-hub electric drive, and hybrid power architecture are promising to reduce logistics footprint and whole life cost of ownership associated with unique components, large repair part inventory and training for both operators and maintenance personnel.