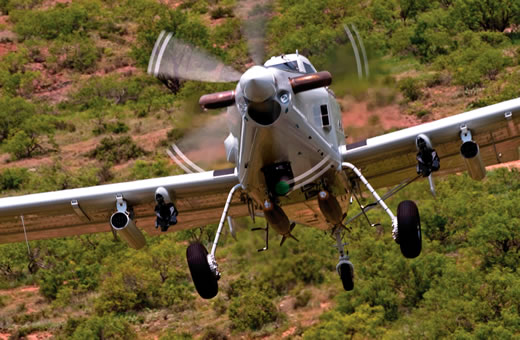 Above: Unlike other surveillance aircraft, the Air Tractor was built to be operated from farm fields and dirt roads, and maintained out of the back of a truck. Photo: CAV

The Air Tractor AT-802U today completed its Trans-Atlantic flight, from Newfoundland to the Azores to England, to display its new capabilities at the 2010 Farnborough Air Show. Air Tractor and Air Tractor Military Dealer CAV (Combined Air Ventures LLC) will display the aircraft and demonstrate its new electronics, sensors and weapons. The AT-802U prototype made its international debut last year at the Paris Air Show. This year at Farnborough the aircraft is displayed with a militarized cockpit, Wescam MX15Di stabilized EO sensor turret, integrated with large HD displays and the all-new glass cockpit. Real-time video can be transmitted directly to ground units using the L3 Rover datalink.

Unlike other surveillance aircraft, the Air Tractor was built to be operated from farm fields and dirt roads, and maintained out of the back of a truck. It has the capability to reduce the cost and footprint of military operations while bringing state-of-the-art sensors and weapons to remote and austere locations. The exceptional 10-hour time on station of the Air Tractor and the massive 8,000-pound useful load allow the aircraft to carry a wide range of sensors and weapons. Five optional weapons load out configurations, including four 500 or 1,000 pounds laser guided bombs and two GAU-19 multi-barrel 12.7mm guns with over 2,900 rounds, six Mini-Talon GPS-INS guided precision standoff attack weapons, four rocket pods loaded with 28 rockets, eight Hellfire missiles or a mixed load of four Hellfire and 16 DAGR laser guided rockets. CAV specializes in creating customized, low-cost, turnkey utility aircraft solutions for border and coastal patrol, surveillance, counter-insurgency, oil spill clean up, and a wide variety of other applications.

The Air Tractor 802 – the largest agricultural aircraft in production and the most successful single-engine firefighting aircraft offered an excellent starting point for the modification The Air Tractor 802 “U” version at Farnborough displays military capabilities previously only available in aircraft that cost 5-10 times more.

The U.S. Air Force specified a requirement for 100 Light Attack/Armed Reconnaissance (LAAR) for which the AT-802U, AT -6 and Tuccano were considered, along with remanufactured vintage aircraft such as the OV-10. Back in 2009 LAAR was considered  for rapid  fielding by 2013; however at present no formal request for proposal emerged.   AT-802 are currently used by the Bureau of International Narcotics and Law Enforcement Affairs for counter-narcotics operations.