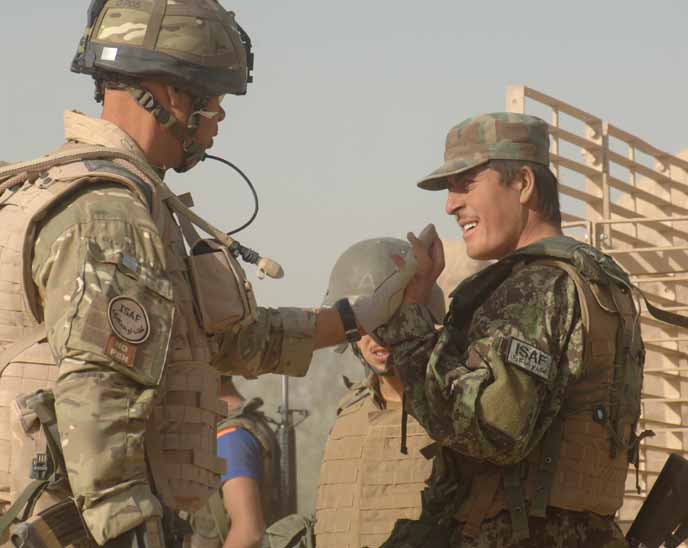 In the hope that the work invested by their British instructors was paying off already, the 3rd Afghan Kandak (Brigade)- led the way into a Taliban stronghold last Sunday morning, in their first large independent operation aimed to reinstate Government authority and bring security to the terror infested area. The operation, known as Op Omid Do (Hope 2), which started on July 11, was the culmination of weeks planning by Colonel Sheren Shah, the Commander of the brigade and his staff,  based in Camp Shorabak in the Helmand desert near Camp Bastion, the main British army camp in Helmand Province.

The Afghan National Army (ANA) force led the convoy out of their camp, moving east through Gereskh to a Check Point on the outskirts of a village called Yakchal. By afternoon, Afghan reconnaissance teams and military engineers were moving forward towards another village, Safian, bridging the wider drainage ditches crossing the area. During the day, the force encountered sporadic incidents of small arms fire from hidden Taliban fighters, some firing rocket-propelled grenades- but no casualties were suffered. Heavier fire was countered by ISAF Apache helicopter gunships, hovering in support. The ANA and their British partners spent the night in compounds in the Safian area before moving further south the following morning.
The main threat from the insurgents by this stage in the operation shifted to that of freshly-emplaced IEDs, but the ANA were able to spot the recently placed explosives and were able to deploy their own disposal teams to eliminate the threat.

As a first independent operation, planned and executed entirely by ANA, Operation Omid 2 could be regarded a success, but it seems a long way, until the Afghans can take over their country’s security against an ever-growing threat from Taliban. In fact, while the official reports tried to magnify 3rd Kandak’s performance, there were some serious incidents, during the operation, which increased the tension between Afghan and British troops. This culminated later at night, when,  resting in mutual quarters, an Afghan soldier opened fire, shot and killed  three British troops in their sleep. The immediate consequence of this brutal action naturally deflected attention away from an operation, that had gone far more smoothly than the British troops expected. Unfortunately the killing at Patrol Base 3 was not the only one suffered by ISAF troops by their Afghan comrades, turning  against their comrades.  Only a week before, Major James Joshua Bowman, Lieutenant Neal Turkington and Corporal Arjun Purja Pun, all of 1st Battalion The Royal Gurkha Rifles, were killed in an attack,  murdered by a traitor they had treated as a trusted comrade. Last November, five British soldiers were gunned down by an Afghan policeman they were training in Nad-e-Ali district.

The sad fact is, that the situation in Afghanistan is steadilly deteriorating, with no visible end in sight. A political and military dead end faces US and British forces. In Afghanistan, it is not that the Taliban is so strong but that the Afghan government is so weak. The Afghan fight has already drawn in radical Muslim jihadists from several countries, including Uzbekistan, Jordan, Egypt and the separatist Russian region of Chechnya. A Jihad war against the western “infidels” is building up dangerously. Moreover, in spite of their efforts, ISAF  is failing to win hearts and minds in Afghanistan. According to a poll released only last week, this indicates that most people in the Taliban heartlands view foreign troops negatively and believe the Taliban should join the government.

In assuming formal command of the US-led war in Afghanistan, General David Petraeus reiterated his indications that the military will alter its rules of engagement, allowing a more unrestricted use of air strikes and artillery bombardments in support of American ground troops. Such a shift will inevitably mean a major escalation, resulting in more casualties among Afghan civilians. But ISAF has little choice. Last month represented the bloodiest for the US-led occupation since the war began, with 102 troops–60 of them American–killed, and many hundreds more wounded. British forces suffered heavily as well. As at 17 July 2010, a total of 322 British forces  have died while serving in Afghanistan since the start of operations in October 2001.

Meanwhile, efforts are made, impressing  the public at home, that actually  matters in Afghanistan were improving, towards the recent declared  to withdraw British troops by 2014- a date. which, based on the present situation, seems questionable. However, a highly publicized passing-out ceremony  saw 409 Afghan  policemen on the square, parading before distinguished politicians and senior officers taking the salute. It demonstrated the culmination of the work by the British-run Helmand Police Training Center- which on this occasion also produced its 1000th Afghan National Policeman, since the school opened in December 2009.

But the sparkling parade-ground performance can be deceiving. The new Afghan army faces huge problems. For starters, only 14 percent of the Afghan army is literate — meaning they can read at a third-grade level. That means the vast majority cannot use a map, read road signs, understand simple instructions or follow a training manual — sharply restricting their ability to advance beyond basic soldier skills. About half the Afghans need glasses because of chronic malnutrition. But few wear them because glasses are expensive and difficult to get — and because wearing glasses is considered a sign of weakness. To try to overcome this problem on the rifle range, U.S. instructors moved the targets in from 300 meters to 250 meters. Adding to this, are  corruption and lethargy, which seem to infuse the ranks, U.S. and allied soldiers say.

Many of these problems could be overcome with a strong cadre of junior leaders and sergeants. But the Afghan army is already short of  12,000 non-commissioned officers. Last fall it was losing a third of its troops every year, because of retirements, battle casualties and mostly desertions. The war in Afghanistan has reached a critical stage despite the presence of about 140,000 foreign troops and with the Taliban at its strongest since the Islamist movement was overthrown in 2001 by the U.S.-led invasion, General David  Petraeus  has a huge job ahead, if he wants to see his troops go home in a  forseeable future.