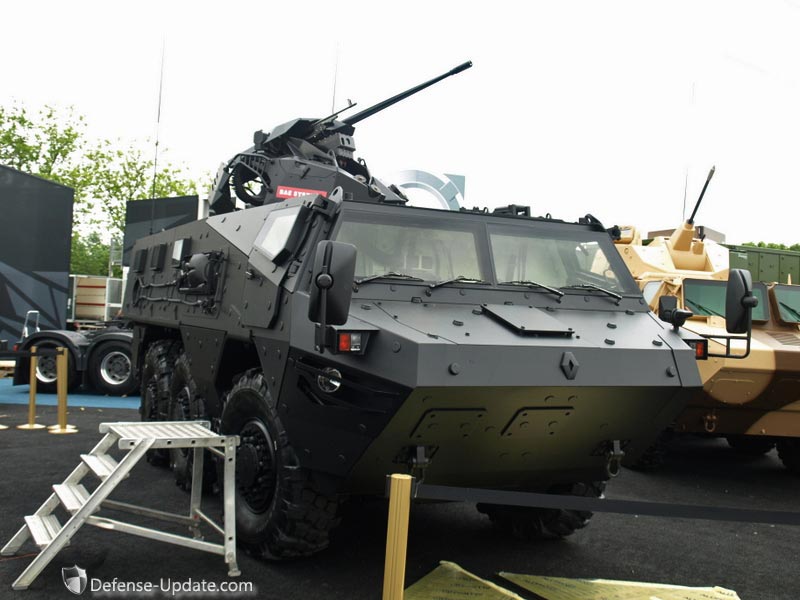 Renault Trucks Defense (RTD) is displaying at Eurosatory the VAB Ultima (below), a highly protected 4×4 version of the armored personnel carrier in service with the French Army for several decades. The French government ordered 290 Ultima units in 2011, and the first 32 are expected to arrive in Afghanistan later this year. Preparing for the Afghan mission, the Ultima received enhanced protection, which includes a belly plate protecting from IEDs, slat grills and a new ‘soft skin’ protecting from RPGs. The total weight of the VAB Ultima is 15.8 tons, carrying eight troops and two crew members plus 1.8 tons of payload. The vehicle is also equipped with a Kongsberg M151 Protector remote weapon station and the usual counter-IED jammer kit.

While the French Army has opted to modernize its 4×4 VABs with the Ultima model, Renault is offering the VAB Mk3 (above) upgraded model of the 6×6 VAB to export customers. At a gross vehicle weight of 20 tons the VAB Mk3 can carry up to 7.5 tons of payload. Retaining high off-road mobility, the vehicle can be equipped with a number of diesel engines, developing 320, 340 or 400 hp. The vehicle is configured to carry seven troops and three crew members. The basic configuration shown here carries the 25mm light turret from BAE.