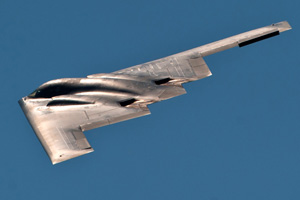 Following North Korean escalating tension with the South,  Washington is stepping up warning. Today the Air Forces’ Strategic Command said it is sending two B-2 Spirit strategic bombers over the peninsula. In retaliation, North Korean leader Kim Jong Un ordered his rocket units to target US bases in the south. “the time has come to settle accounts with the U.S. imperialists in view of the prevailing situation” North Korean news agency announcement said, “The US has entered a reckless phase, going beyond the phase of threat and blackmail,” the announcement quoted KIm saying.

While chances of a full scale war with the South seem unlikely, there are fears of a localized conflict, such as a naval skirmish in disputed Yellow Sea waters. Such naval clashes have happened three times since 1999.

Amid tensions over the North’s third nuclear test last month and ensuing United Nations sanctions, North Korea had already shut down Red Cross hot lines with South Korea and a communication line with the American military command in South Korea. Yesterday, Pyongyang terminated the last remaining link with the South, accusing the South’ new President Park Geun-hye of pursuing the same hard-line policy of her predecessor that the North blamed for a prolonged chill in inter-Korean relations. “Under the situation where a war may break out any moment, there is no need to keep North-South military communications,” the North said on Wednesday.

U.S. Strategic Command officials sent two B-2 Spirit bombers for a long-duration, round-trip training mission from Whiteman Air Force Base, Mo., to South Korea March 28 as part of the ongoing bilateral Foal Eagle training exercise. The stealth bomber’s mission followed two deployment of B-52H missions over South Korea last week, which drew fierce response from North Korea. “The United States is steadfast in its alliance commitment to the defense of South Korea, to deterring aggression, and to ensuring peace and stability in the region. The B-2 bomber is an important element of America’s enduring and robust extended deterrence capability in the Asia-Pacific region.” United States Forces Korea communique responded.

This mission by two B-2 Spirit bombers assigned to 509th Bomb Wing, which demonstrates the United States’ ability to conduct long range, precision strikes quickly and at will, involved flying more than 6,500 miles to the Korean Peninsula, dropping inert munitions on the Jik Do Range, and returning to the continental U.S. in a single, continuous mission. “Exercise Foal Eagle demonstrates the commitment of the United States and its capability to defend South Korea and to provide extended deterrence to our allies in the Asia-Pacific region.”

North Korea announced yesterday it is planning substantial military actions, including pre-emptive nuclear strikes against the United States and South Korea. Pyongyang also claimed it is targeting US territories in Guam and Hawaii, however, despite the clear threat, North Korea does not currently have the means to carry out such threat.