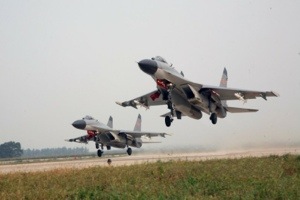 In response to a 25 March Chinese CCTV News Agency and People’s Daily report announcing a major arm’s deal between Moscow and Beijing, Russia’s ITAR-TASS News Agency published a denial the same day claiming no such deal was made. The denial was first announced by DefenseNews. The Chinese news media reports claim that an agreement was signed just prior to Chinese President Xi Jinping’s weekend visit to Russia. The reported deal would provide China with 24 Sukhoi Su-35 fighters and four Amur-class diesel submarines. An agreement of this magnitude, if confirmed, would represent the first major arm’s deal between Moscow and Beijing in more than ten years.

The ITAR-TASS news story, as reported by DefenseNews, insists that Moscow and Beijing did not engage in any discussions related to military hardware, weapon’s transfers, or technology cooperation immediately prior to or during President Jinping’s weekend visit.

The Sukhoi Su-35 (codenamed the Flanker-B by NATO) is a highly-maneuverable twin-engine, single-seat, multirole fighter aircraft. China and Russia have engaged in several discussions since the 1990s regarding a possible sale of Su-35s. Since 1998, several reports have surfaced announcing sales of Su-35s to China, deals that never materialized. Reports announcing the sale of Tupolev Tu-22M bombers were also met by immediate Russian denials in January 2013.

Some well-placed analysts believe Russian officials are reluctant to execute a Memorandum of Understanding (MoU) Moscow and Beijing signed in December 2012 laying the foundation for negotiations that might eventually culminate in a firm deal for the submarines and the Su-35s.
It is widely believed that previous negotiations were scuttled due to concerns within Russia’s ruling hierarchy that, given Beijing’s track record for reverse-engineering vital technology, China would use the Su-35 as a model to construct a new Chinese aircraft in violation of Russia’s International Property Rights (IPRs).

Concerns have also been voiced in some circles that Beijing hopes to gain access to the Saturn AL-1175 engines used to power the Su-35 to be used as a model for a domestically-produced copy. The AL-1175 also powers Russia’s T-50 prototype for its fifth-generation stealth fighter, the Sukhoi PAK FA.

Russian officials have long claimed that Beijing used a 1995 production-licensing agreement to build 200 Sukhoi Su-27SK air superiority fighters to secretly create an indigenous aircraft, the Shenyang J-11B, in violation of IPR requirements. Russia cancelled the agreement in 2006 after 95 aircraft had been produced insisting that the J-11B represented a reverse-engineered copy of the Su-27SK equipped with Chinese avionics and engines.

Some analysts speculate that Russia is also reluctant to go ahead with the sale of the Amur-class diesel submarines as fears abound that Beijing will also attempt to secretly reverse-engineer the boats in an effort to manufacture an indigenous Chinese copy.

The Amur-class is one of Russia’s latest designs, often called an export example of the Lada-class, and is advertised as being a modernized version of the Kilo-class submarines. The Russians claim the Amurs feature advanced combat capabilities, innovative acoustics that enhance stealth operations, and an optional Air-Independent Propulsion (AIP) system.

According to some experts, China’s prospects for reverse-engineering the Amur subs or the Su-35s are not as promising as they may appear. With the Su-27SK, Beijing took advantage of favorable technological exchanges with the Ukraine to obtain the data required to overcome engineering challenges. Now, the Ukraine has no access to the latest, more advanced Russian aircraft or naval designs and no secrets to trade with the Chinese.

Given the rapid technological advances China has demonstrated in recent years, not all analysts believe Beijing is bent on reverse-engineering entire systems. Some argue that any future copying would likely be limited to adapting separate components for inclusion in new indigenous models.
The Russian newspaper Kommersant claims the deal, if consummated, would be worth approximately $2 billion. A deal of this nature would be a major boost to China’s military posture. Weapons like the Su-35 and the Amur-class subs would give Beijing a significant edge in its continuing territorial disputes with its Pacific neighbors.

With its domestic stealth aircraft still being tested and not yet in production, the Su-35 represents a significant strengthening of China’s airborne combat force that is certain to create concern in the minds of China’s Pacific adversaries.

With Japan scheduled to receive its first batch of F-35 Joint Strike Fighters (JSF) in late 2016 and China’s highly-touted J-20 and J-31 stealth fighters are not likely to become operational until sometime in 2017 at the earliest, acquisition of the Su-35 would help Beijing fill a perceived gap in its ability to defend its territorial airspace.

As for the Amur submarines, it seems logical that Russian officials would be well-disposed to making a deal with China. Since this model is not a vessel of strategic value, equipping China with these boats would make America’s “Pivot to the Pacific” a more challenging endeavor and might go far in helping Russia keep the United States off-balance.

We can only speculate as to the validity of the Chinese claims that the deal was signed and will soon become a reality. It is uncertain if the Russian denial is a firm fact, a temporary postponement, or a ruse designed to mislead for unknown reasons.