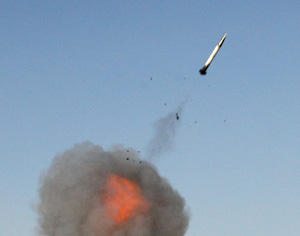 The MS-SGP provides a single projectile capable of responsive, tactical fires for addressing stationary or moving targets for multiple U.S. or allied services at a fraction of the cost of current alternatives. “Currently the U.S. and its allies are using significantly more expensive solutions to address fire support and tactical targets,” said Chris Hughes, vice president and general manager of Weapon Systems at BAE Systems. “The projectile can provide the U.S. forces with an affordable, long-range, and precision gun-launched projectile to greatly expand our fire support capability.”

The guided projectile is developed in the standard 5-Inch naval gun configuration and saboted 5-Inch variant sized for 155mm howitzers operated by the Army and Marine Corps. The naval Mk 45 Mod 4 five inch guns has been deployed worldwide with more than 25 navies. Designed to fit this popular caliber in naval gun systems, SGP offers current naval platforms the capacity to provide long range joint fires and support asymmetric operations around the world. The Mk 45 Mod 4 will deliver 5-Inch fires at a maximum rate of 10 rounds per minute to 52 nautical miles to achieve desired effects.

While BAE Systems has achieved this milestone with its guided projectile, Raytheon is moving into this slot with a new derivative of its combat proven Excalibur Ib. The company is funding a development program to enhance its the current GPS-guided projectile with a new Guidance and Navigation Unit (GNU) employing a semi-active laser (SAL) offering ‘end-game targeting capability’. According to Raytheon, the addition of the SAL seeker will allow the munition to attack moving targets designated by other sources, such as forward observers or remotely piloted aircraft (RPA). Using laser targeting Excalibur will be able to attack targets that have re-positioned after firing, or change the impact point to avoid casualties and collateral damage. Raytheon plans to integrate the new GPS/SAL capability in 5-inch (127mm) naval guns, enabling such weapons to engage moving targets on land and at sea. Counter-swarming boat capability will be the prime focus of such at-sea moving target capability using a high-firing rate naval guns. According to company sources the transition to the naval 5-inch configuration will be easily made as the existing 155mm Excalibur Ib GNU design also fits in a 127mm projectile body.

“No other gun-launched GPS-guided artillery round is as precise as Excalibur, which in its current design gives one the ability to hit within 4 meters of the target 90 percent of the time,” said Kevin Matthies, Excalibur program director for Raytheon Missile Systems. “Now we’re ready to take this to the next level, giving the warfighter the ability to not only re-target the munition in flight, but leverage Excalibur’s maneuverability to use the pinpoint precision of a semi-active laser seeker to hit targets on the move.”

Recent tests of the SAL seeker have demonstrated the robustness of the design in a severe gun-firing environment. The company said it will offer existing customers to upgrade their Excalibur Ib guidance and navigation units with the new GPS/SAL capability.

On the other side, BAE is moving into Raytheon’s turf offering the land-based derivative of the saboted 5-Inch SGP, that can be fired from standard 155mm howitzers in service with the Army and Marine Corps. The company plans to fire the MS-SGP from an M777 towed howitzer in the summer of 2013. MS-SGP will expand the range and area covered by direct and general support artillery units, to provide long range joint fires in support of ground combat operations. Artillery units firing the 5-Inch Saboted SGP will deliver a volume of effects on desired area targets out to a range of 70 kilometers. By use of flight profiling, the 5-Inch Saboted SGP can execute Multiple Rounds Simultaneous Impact (MRSI) missions, magnifying lethal effects.

Both the 5-Inch SGP and Saboted SGP offer rapid time of flight and the capability of in-flight retargeting to address moving targets, changing target conditions, and surface threats. They both deliver all weather precision attack capability to fully defeat targets with high-explosive warheads, while operating within a jamming environment. Tested component designs are based on a spiral of the highly successful 155-mm Long Range Land Attack Projectile (LRLAP).