According to John Koger, MSDSA program manager, for the Air Force Research Lab in Dayton, Ohio, a key program objective is to advance the technology at lower cost relative to current electronically steered antennas. “Our sense and avoid sensor incorporates SNC’s unique Electronically Reconfigurable Array (ERA). The entire sensor has been designed and developed as an ABSAA building block that is easily scalable to serve as the solution to multiple UAV CONOPS and installation challenges,” said Greg Cox, corporate vice president of SNC’s Communication, Navigation, Surveillance/Air Traffic Management Business Area.

ABSAA has evolved from a requirement made by the Air Forces’ Aeronautical Systems Center (ASC) Intelligence, Surveillance, and Reconnaissance and Special Operations Force (ISR&SOF) Directorate to develop a sensor agnostic, platform agnostic sensor fusion and avoidance maneuver product. Such product was needed to satisfy the regulatory ‘see and avoid’ requirement, paving the way for the integration of Remotely Piloted Aircraft (RPA) into the National Airspace System (NAS) and maritime environment. This requirement is specially acute with the introduction of the MQ-4C Triton maritime surveillance drone, flying over wide and remote areas of the ocean, where absence of ABSAA would significantly hinder its operational flexibility. The initial increment of ABSAA is expected to utilize Traffic Alert and Collision Avoidance System (TCAS), Automatic Dependent Surveillance – Broadcast (ADS-B), radar, and Electro-Optical/Infrared (EO/IR) input while allowing easy integration of other sensor types in the future.

The regulatory requirements are 14 Code of Federal Regulation (CFR) Part 91.111 & 91.113. To satisfy these CFRs, sensors will connect to the sensor agnostic, platform agnostic sensor fusion and avoidance maneuver product, then to the flight controls and operator interface. The prototype, x-band Multi Sensor Detect Sense and Avoid (MSDSA) radar sensor developed by SNC was demonstrated for the first time in November 2011, when it repeatedly detected and tracked airborne intruders resulting in over 60 seconds of avoidance time.

At the AUVSI exhibition last year ITT Exelis unveiled the SkySense 2020H airborne sense-and-avoid (ABSAA) radar it said was under development for the U.S. Navy’s MQ-4C Triton. The company is under contract from Northrop Grumman to provide the air-to-air radar subsystem for the Triton. The sense-and-avoid radar enables the aircraft to comply with the International Civil Aviation Organization requirement that military and other state aircraft operate with “due regard” for the safety of civil aircraft when operating over international waters. The radar will provide information to the RPA operator to maneuver the aircraft away from possible collisions; maintaining ‘air traffic separation’. In the future, an autonomous aircraft will perform its own maneuvers based on the ABSAA radar data (Collision avoidance mode).

According to AIN’s Bill Carey, the radar will be positioned behind the nose cone of the aircraft, the ABSAA radar is a three-panel, thin-tile array operating in the Ku-band. The range will be 8 to 10 nm, with a wide field of view (110 degrees on either side and 30 degrees up and down). The system is self-contained, with no supporting racks of processing electronics, and weighs 50 pounds. “This isn’t a repurposed radar; it’s dedicated for sense-and-avoid, but it can also be multiuse,” Jones said, adding that communications and weather-radar modes are being explored. 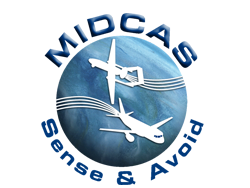 Thales is also working on a Sense and Avoid radar sensor developed specifically for RPA/UAS. The company is focusing on X or Ku bands for best weather and angular resolution accuracy. Thales plans to use Digital Beam Forming (DBF) rather than Electronic Scanning (E-Scan) offering higher dewll time, better angular coverage and lower cost implementation. As an all weather sensor, such radar will be able to provide the direction of intruders, measure closing velocity and distance of targets, thus providing all necessary data for evasive action calculation.

This radar will be one of the systems to be evaluated under the Europe Mid-Air Collision Avoidance System (MIDCAS) launched in 2009. The program has entered development and simulation this year and is expected to reach the flight demonstration phase by year’s end. Through this collaborative European program, MIDCAS is contributing to the integration of RPA in civilian airspace, by proposing a baseline of solutions for the “Unmanned Aircraft System Mid-air Collision Avoidance Function” acceptable by the manned aviation.

Currently, Mid-Air Collision avoidance is ensured by several safety layers handled by Air Traffic Management, Local Air Traffic Controller, embedded Collision Avoidance systems as ACAS and the “See & Avoid” capability of a human pilot. This capability shall respect ICAO “Rules of the Air”. MIDCAS goal is to implement such capabilities with UAS. As such, MIDCAS should detect (or sense) aircraft flying in the the vicinity of the RPA equipped with the system, maintain situational awareness for the human pilot controlling the RPA, and, if needed, recommend an evasive manoeuvre or execute such manoeuvre automatically, thus restoring safe situation between UAS and others aircraft.