Home 20th Century WWII Back to the southern salient 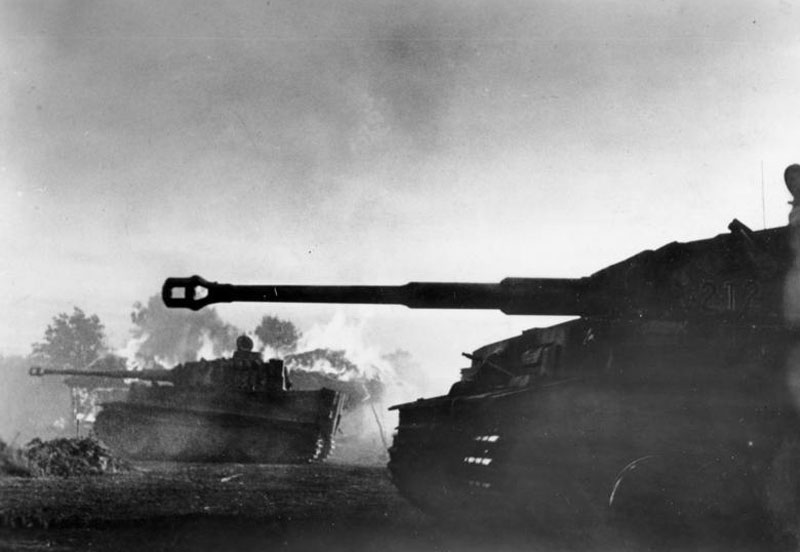 During the night of 4–5 July SS combat engineers had infiltrated no-man’s land and cleared lanes through the Soviet minefields. At dawn the three divisions of II SS Panzer Corps – 1st, 2nd and 3rd SS Panzer Divisions- moved to attack General Ivan Christiakov’s 6th Guards Army defenses. Using a special “Panzer Keil” formation, at the point of the wedge were the heavy Tigers, flanked by Panthers, while the older tanks followed behind, well protected by the heavies. This panzer tactic, might have been fully effective if both Tigers and Panthers were up to their expected operational value. But they were relatively new and still full of technical problems, which caused severe setbacks.

What proved to be the best tank performing at Kursk was the Pz IV G version. Even though the T-34 had better speed and mobility, it’s armor could easily be penetrated by the L/48 gun at 1000 meters.

Leading the assault with the heavy Tiger tanks, protecting the more vulnerable Pz III and IV, while also bringing forth a strong armored vanguard for its most effective firepower at the first encounter- was foreseen as the very best solution to open the offensive against the Russian defenses. Shock-and Awe was the motto, but while it did, for the first phase function as planned in Iraq, several decades later, here at Kursk it backfired. The Soviets, having anticipated the strong German panzer assault, had organized their defenses, emplacing their heaviest equipment and the best troops to stop the German onslaught, right up front. General Hoth’s tactic staggered, as his two elite panzer corps, storming head-on soon closed range with the enemy defenses and  exposed their best equipment to the full effect of the Russian heavy anti-tank fire coordination in their prepared defenses, thereby losing the effect of their massive long-range firepower- but close enough for the defending T-34 and anti-tank artillery to penetrate even the thick Tiger armor protection, at their weakest points known and thoroughly trained by the Soviet troops.

What Hausser and his superiors did not realize, was the huge reserves, which the Russians had concentrated under highest secrecy and stealth, the Steppe Front, commanded by capable General Ivan Konev massing its forces, preparing for a tremendous counter attack, which would dislodge all German planning for the campaign. Only days before, the 2nd SS Panzer Corps officers were confident that through their impressive power, victory was in hand, as one officer joyously declared: ” “We will have lunch in Kursk!” But the SS would never have lunch nor dinner in Kursk, other then as prisoners!

While  9th Army encountered growing resistance from Rokossovsky’s massed armor reserves and his infantry fighting desperate battles in the endless maze of Soviet defenses, Model played his last card by throwing in his own armor divisions, which he had held in reserve for the “final” strike into the Russian rear, closing the pincer with Hoth’s 4th Army. But it was not to be. Losses grew dangerously by the day, as seemingly endless numbers of Russian tanks appeared out of nowhere and desperate fighting went on day and night with no decision achieved.

All depended now with “Papa” Hoth’s 4th Army and Hausser’s ambitions to decide the battle of Prokhorovka, which  was the key objective for his campaign. The relatively open terrain made excellent tank country, bringing the German 88mm/56cal long range firepower to its maximum effect. But while the Germans were confident to achieve a decisive win at Prokhorovka on 12 July, it proved them wrong. As Hausser’s panzer divisions smashed through the last Soviet lines of defense, they came up on a painful surprise.