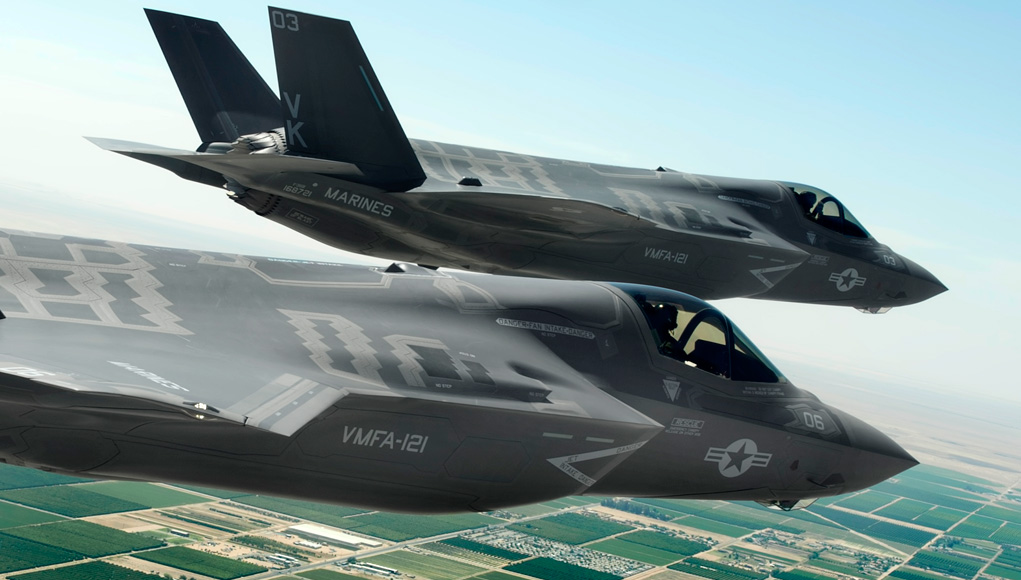 “I am pleased to announce that VMFA-121 has achieved Initial Operational Capability (IOC) in the F-35B, as defined by requirements outlined in the June 2014 Joint Report to Congressional Defense Committees,” said Gen. Joseph Dunford, Commandant of the Marine Corps. “VMFA-121 has ten aircraft in the Block 2B configuration with the requisite performance envelope and weapons clearances, to include the training, sustainment capabilities, and infrastructure to deploy to an austere site or a ship. It is capable of conducting Close Air Support, Offensive and Defensive Counter-Air, Air Interdiction, Assault Support Escort and Armed Reconnaissance as part of a Marine Air Ground Task Force, or in support of the Joint Force.” Dunford stated that he has his full confidence in the F-35B’s ability to support Marines in combat, predicated on years of concurrent developmental testing and operational flying. (See our 14/6 article “F-35 – Beyond Stealth“)

“Prior to declaring IOC, we have conducted flight operations for seven weeks at sea aboard an L-Class carrier, participated in multiple large force exercises, and executed a recent operational evaluation which included multiple live ordnance sorties, said Dunford.” The F-35B’s ability to conduct operations from expeditionary airstrips or sea-based carriers provides our Nation with its first 5th generation strike fighter, which will transform the way we fight and win.”

As the future of Marine Corps tactical aviation, the F-35 will eventually replace three legacy platforms: the AV-8B Harrier, the F/A-18 Hornet, and the EA-6B Prowler.

“The success of VMFA-121 is a reflection of the hard work and effort by the Marines in the squadron, those involved in the program over many years, and the support we have received from across the Department of the Navy, the Joint Program Office, our industry partners, and the Under Secretary of Defense. Achieving IOC has truly been a team effort,” concluded Dunford.

The U.S. Marine Corps has trained and qualified more than 50 Marine F-35B pilots and certified about 500 maintenance personnel to assume autonomous, organic-level maintenance support for the F-35B. The F-35 Program Executive Officer Lt. General Christopher C. Bogdan congratulated the Marines for their achievement, saying: “The fact the Marines reached IOC at the beginning of their six-month window is a testament to the professionalism and dedication of the entire F-35 enterprise.”

“The performance of the VMFA-121 during the ORI in all evaluated maintenance, flight operations, and exams was exceptional.” said Lt. Gen. Jon Davis, Deputy Commandant for Aviation, “The squadron’s aircraft performed well in all five IOC operational scenarios: Close Air Support, Air Interdiction, Armed Reconnaissance, Offensive Counter Air and Defensive Counter Air. This included live ordnance deliveries. The demonstrated capability of the squadron in the ORI, and in their run up to it, have given me the confidence that they meet our IOC criteria and, if required, could respond to a contingency, giving our nation its first sea-based 5th generation strike fighter capability. As such, the Commandant of the Marine Corps has decided to declare VMFA-121 initial operationally capable.” Davis said.

“As we field the F-35, we must remain vigilant in the forging of a sustainment system which supports readiness rates required to train for and conduct sustained combat operations.” Davis added, “If I have any concern at this point, it is that the spare parts available to extract maximum value from this exceptional warfighting asset will be shy of what we will truly need. In our legacy fleet, we resource our sustainment accounts in order to achieve between 70 and 75% readiness. I think we have that wrong, and I want to see if we can do better with this new platform. The F-35B has so much potential. Per the Commandant’s guidance, I’ve asked my staff to see why we can’t resource this jet to achieve a significantly higher readiness rate.” Davis said.