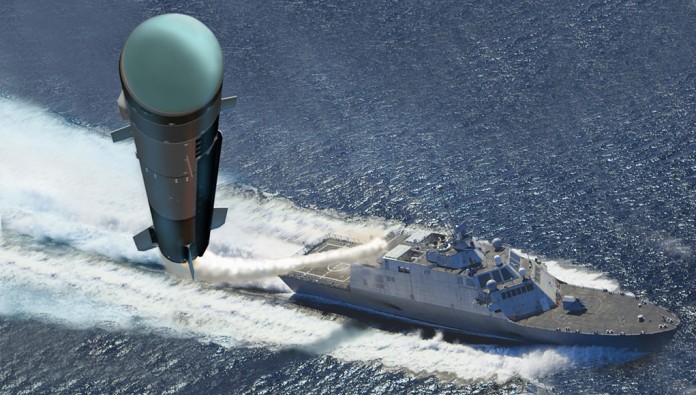 In a recent test series performed by the US Navy, eight Army/Lockheed martin AGM-114L ‘Longbow Hellfire’ missiles destroyed seven fast naval craft simulating fast attack craft performing swarm attacks, similar to those practiced by the Iranian navy in the Arabian Sea and the Persian Gulf. The test was part of the engineering development test of the Surface-to-Surface Missile Module (SSMM), for use on littoral combat ships (LCS).

The tests, that took place in June 2015 in the Atlantic Ocean, off the coast of Virginia, evaluated the integration of the vertically-launched AGM-114L Longbow Hellfire missile system for the SSMM solution. In this application the missile receives initial target data from a surface search radar or an airborne radar on a helicopter, before launch. After launch, it activates the onboard millimeter wave seeker to find the target. The system has an initial range of eight kilometers and features fire-and-forget and multi-mode capability. The multi-purpose warhead ensures effectiveness against various types of attacking craft.

Integration of the “fire-and-forget” Longbow Hellfire missile on LCS represents the next evolution in capability being developed for inclusion in the Increment 3 version of the surface warfare mission package for LCS. When fully integrated and tested, each 24-shot missile module will bring added firepower to complement the LCS’s existing 57mm gun, SEARAM missiles and armed MH-60 Sea Hawk helicopter.

The SSMM is expected to be fully integrated and ready to deploy on LCS missions in late 2017 and to increase the lethality of the Navy’s fleet of littoral combat ships.

The test scenarios included hitting targets at both maximum and minimum missile ranges. After a stationary target was engaged, subsequent targets, conducting serpentine maneuvers, were engaged. The tests culminated in a three-target “raid” scenario. During this scenario all missiles from a three-shot “ripple fire” response struck their individual targets.

The ‘Guided Test Vehicle-1’ test was designed to test the launcher, the missile, and its seeker versus high speed, maneuvering surface targets that represented fast inshore attack craft that are a potential threat to Navy ships worldwide. “This test was very successful and, overall, represents a big step forward in SSMM development for LCS,” said Capt. Casey Moton, LCS Mission Modules program manager.

The Navy evaluated several solutions for the SSMM capability, including EO and semi-active laser guided weapons such as the Griffin IIB missile. The Longbow was selected, in part, for its ability to conduct simultaneous attacks on different targets. Another aspect was affordability, as thousands of AGM-114L are already in stock with the US Army.

In 2011 the Navy originally favored the Griffin IIB missile developed by Raytheon to be the follow-on missile, after the cancellation of the Non-Line of Sight Launch (N-LOS) missile system originally planned to be the primary surface weapon for the LCS. When the threat of Fast Attack Craft/ Fast Inshore Attack Craft (FAC/FIAC) became acute, primarily in the Persian Gulf, the Arabian Sea and the Western Indian Ocean, the capability of simultaneous target engagement became top priority, positioning the Longbow as the Navy’s favorite weapon for short- range Surface Warfare (SuW).