The Russian Boomerang 8×8 VPK 7829 combat vehicle was developed by the VPK company in two configurations, the 25-ton K17 Armored Fighting Vehicle (AFV) and a 22-ton amphibious Armored Personnel Carrier (APC) designated K16. Intended to replace heeled combat vehicles such as the BTR80, in service with the Russian Army and border guards, Boomerang represents a new approach in all aspects – a new chassis, more ground clearance, and significantly higher vehicle, new armor, and new armament. According to Russian defense sources, VPK is building new Boomerang prototypes for the planned state trials by the Russian Army. The Boomerang was unveiled on the May 9 parade in 2015, along with the Armata family and Kurganets 25 AFVs.

The Boomerang has an operating range of 800 km. It is powered by a new, 750 HP digitally controlled diesel engine developed by the Yaroslavl Engine Plant. It is coupled to an automatic transmission. It has a road speed of 100 km/h and 50 km/h offroad. On amphibious operation, the Boomerang can swim at a speed of five knots (10 km/h).

Each vehicle is manned by a crew of three – a commander, gunner, and driver. It can carry eight troops with their combat loads. Unlike the side access doors used on the BTR 80, the Boomerang uses a rear access ramp, similar to western and BMP-type Russian APCs. Access hatches are also available on the top. Both versions use passive protection comprising a combination of steel and composite/ceramic armor. Laser detectors and instant multi-spectral smoke dischargers offer a form of ‘soft’ active protection, enabling the vehicle to maneuver under the smoke cover to avoid the hit. multiple video cameras are mounted around the vehicle providing a 360-degree vision for the crew.

The K-17 can also be equipped with the Afganit hard Kill countermeasures, that utilizes radars to detect the threat, and launches blast-fragmenting countermeasures to intercept anti-tank missiles, anti-tank projectiles (including kinetic) and rockets at ranges of 4-200 meters from the vehicle. To improve protection from mine blasts and Improvised Explosive Devices (IED) the Boomerang is higher, relative to the previous generations of Russian AFVs. The additional height enables the blast’s mitigation and opens some space for blast attenuating seats for the crew and passengers. 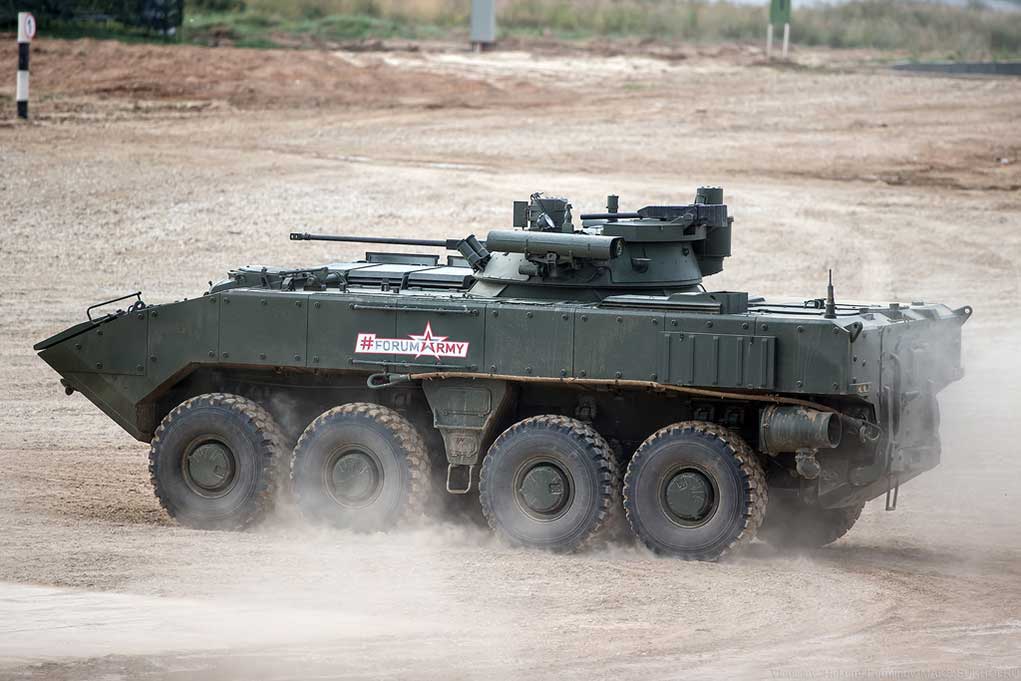 The K17 version uses a multi-purpose remotely controlled turret mounting a 2A42 30mm gun with 500 rounds (160 AP, 340 HE-Frag). This gun can effectively engage ground targets at ranges of 1.5 – 2.0 km, and airborne targets, such as helicopters and UAS, at a distance of 2.5 km. The cannon can fire semi-automatic fire, slow automatic (200-300 rounds per minute) or fast bursts of 550 – 600 rounds per minute. The turret has two identical optronic sights enabling the crew to engage two targets simultaneously, including firing two Kornet missiles (a method engaging targets defended by active protection) or firing a missile and the gun simultaneously.

The turret also carries two pairs of Kornet-D anti-tank/anti-material guided missiles, stored in ready to launch containers. Kornet-D is the domestic version of the Export-version of the weapon known as Kornet-E. The missile is available with a tandem High-Explosive Anti-Tank warhead capable of penetrating a 1,100 – 1,300 mm rolled homogeneous steel (RHA) armor protected by reactive armor. It can also carry a blast-fragmenting thermobaric warhead effective against structures and buildings. The turret also has a coaxial 7.62 PKT machine gun and can also mount a 30mm grenade launcher on top. The K16 uses a smaller turret mounting a 12.7mm machine gun, 7.62mm coax or grenade launcher.