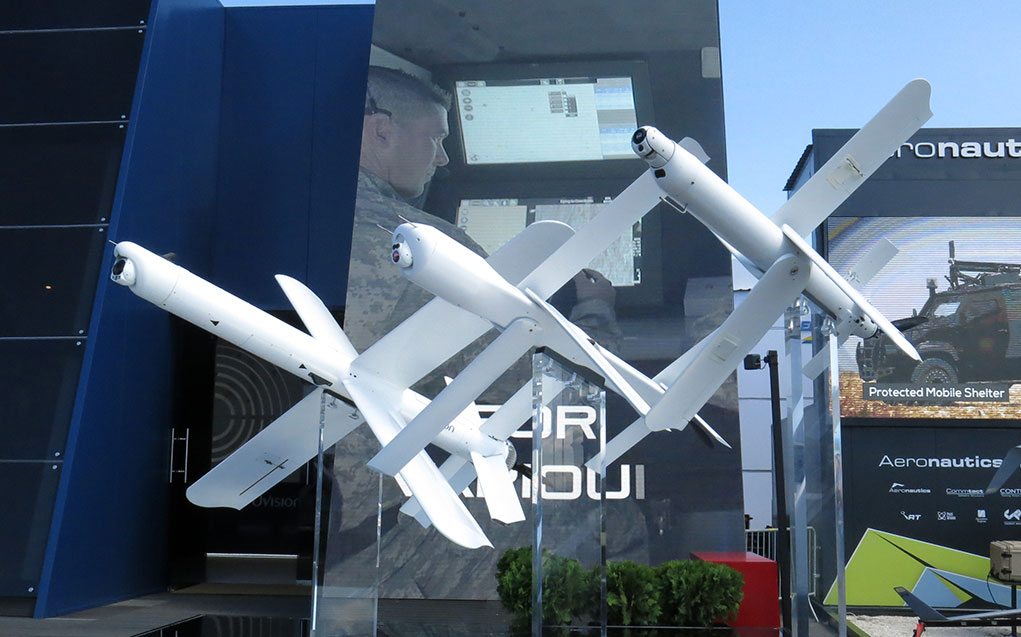 Although Loitering Munitions (LM) have been introduced decades ago, these weapons have gained general acceptance and maturity in recent years, following their operational debut in battlefields in the Caucasus and the Middle East. While several manufacturers already offer various types of ‘suicide drones’, only a few are committed to this category as Israel’s UVision Air, the developer, and producer of the Hero line of loitering missiles that unveiled a range of new members of its Hero family of LMs this week at the recent Paris Air Show. Uvision has already sold Hero LMs to multiple customers, including the Israel Defense Forces, and leading NATO countries.

The first product introduced by the company was the light-weight man-packed Hero-30, a man-portable loitering system offering dismounted forces unmatched, precision beyond the line of sight surveillance and attack capability. Deployable within minutes, with 30 minutes of autonomy and a range of up to 40km, Hero-30 can engage moving targets such as light vehicles, speed-boats, and dismounted armed forces.

At the Paris Air Show, the company unveiled the smallest member of the Hero family – Hero 20 – a loitering weapon that weighs only 1,800 grams, including a fully stabilized and gimballed EO/IR day/night payload for target search and track, and a small blast fragmentation warhead weighing only 200 grams. The miniature Hero-20 can operate at a range of 10 kilometers and packs a battery for 20 minutes of endurance. It is launched from a single or multiple-launcher that is operated by a single person.

The loitering and pinpointed strike capabilities set the Hero LM apart of other loitering munitions and missiles, in its ability to locate targets of opportunity, pursue an attack and safely abort a strike even at the last seconds of its terminal phase, thus enabling military forces the operational freedom to pursue targets in in populated areas or remote locations while minimizing the risk of collateral damage. Training with loitering weapons can be performed with the system’s training simulator or by retrieving unarmed weapons using the platforms parachute system.

While Hero-30 is the smallest and lightest loitering weapon UVision offers, it is not the only one operated by dismounted forces. In fact, the Hero operational concept foresees different loitering platforms supporting the lowest echelon with weapons launched at different levels – organic assets carried and delivered at company and platoon level, Hero 120 launched by vehicles maintained at battalion and brigade level, and Hero 400EC operated from multiple launchers at the division level. Hero 30 and its larger sibling, Hero 400EC, are already matured and operational.

At the Paris Air Show 2019, the company introduced the 1.34-meter-long Hero-120 Mid-Sized Loitering Munition (MSLM), offering customers the flexibility to optimize the loitering weapon effect against different targets. With modular warhead and scalable battery pack, MSLM can carry different warheads triggered by a common multi-mode fuze, from 1.5 kg up to 4.5 kg, featuring Airburst Fragmentation for beyond line of sight anti-personnel effect, Point Detonation for anti-structure effect, a High Explosive Anti-Tank (HEAT) option, defeating the armor of modern main battle tanks with a top and proximity mode for penetration of windows and vehicles. The Hero-120 operates at a typical altitude of 1,500 ft. above ground, where it maintains a low acoustic, thermal and visual signature. The flight time has increased to 60 minutes, thanks to a redesigned fuselage that offers a compact packing in the launch canister while maintaining a large warhead size. Hero 120 is controlled via datalink from 40 km afar, and dive on its target at 100 knots. Total weight is 12 kg.
UVision also offers the larger Hero 400EC, a 2.1-meter-long LM that weighs 40 kg, and a cruciform wing assembly that spans 2.4 meters. The Hero 400EC has an operational ceiling of 18,000 ft. (above sea level) and speed of 50-100 knots. The LM can operate at a range of 40 km from its launcher using the standard data link, or use a directional antenna to extend that range to 150 km. It uses a multipurpose warhead that includes a tandem HEAT or fortification penetration (PBR) warhead.

In addition, the company revealed the Hero-400EC Multi-tube launcher system, weighing 650 kg including 6 munitions. Customers can configure the launcher with four, six or up to 12 loitering munitions, depending on the vehicle load and space specifications. The multi-tube launcher stores, transports and launches the loitering missiles straight from their sealed canisters. The multi-canister launcher can be mounted on a range of land or naval platforms, including Multiple Launch Rocket Systems (MLRS) and High Mobility Rocket Systems (HiMARS) that are widely used with the US Army, US Marine Corps, and international military forces. The four-tube launcher can be operated from a JLTV. Due to the Hero-400EC long range and endurance capabilities, the launcher can be operated from the relative safety of rear areas, distant from enemy lines or from forwarding Operating Bases (FOB), controlled by remote by the user or from the FOB command post.