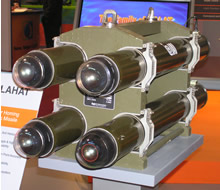 Many Russian companies participated as part of the Rosboronexport pavilion. Among the participants was Electro Machina, state company, which demonstrated advanced systems for tank upgrading, including the Shtora-1 system, believed to be part of the Indian T-90 program. KBP presented an active armor protection solutions, including the Drozd. Other modernization programs are offered for the Russian BMP-3 by Kurganmashzavod. Further upgrading options were discussed by Mahindra, which is collaborating with Kinetics for the integration of Climate Control Systems (CCS) and Life Support Systems (LSS) for the new T-90 tank and BMP-2.Other improvements proposed include the installation of missile/gun systems such as the Kuliver, on troop carriers such as the BTR-80 and BMP series vehicles. This turret combines the firepower of the 2A27 automatic gun with the range and long range precision of the Kornet-E missile.

The Russian Artem company displayed the COMBAT anti-tank laser beam riding missile, which can be fired through the 125mm gun of the T-80UD, T-84, T-72AG, B and C models.

A modernization program for T series tanks was also highlighted by KBP. The improvements enable day/night operation at extended range, firing of ammunition and missiles on the move, automatic tracking which improves target handling by 3 – 6 times, compared to manual track – and improved gunnery techniques. The system includes an improved the fire control system, gun stabilization and ballistic computer, and installation of separate gunner and commander’s sights. The introduction of new optics enable the use of gun fired laser beam riding anti-tank missiles, such as the 9M117M1 missile (for 115mm guns) and 9M119M missile (for 125mm guns).  The missiles use semi automatic line of sight (SACLOS) Radio Frequency (RF) guidance and can hit targets at maximum range of 5 – 6km penetrating up to 950mm of ballistic steel. Previous versions of this munitions included the 9K112 Kobra (also designated AT-8 Songster NATO code).

Another laser guided system displayed here was the Lahat, designed by IAI/MBT. This laser homing projectile can be fired at targets designated by the firing tank or any other source (UAV, infantry or helicopter) therefore, enabling the firing platform to disengage immediately after firing. Lahat can hit targets well beyond the range of conventional tank ammunition. The new missile recently passed field tests and live firing from Arjun tanks in India, and IAI has signed an agreement for local production of the missile. The Indian Army expects to take delivery of all 124 Arjun units on order, by early 2006.

Lahat missiles are designed for 105 and 120mm guns, and can also be accommodated with 125mm guns. The system was displayed in the tank gun configuration, as well as in its a lightweight quad launcher, which can be carried on ground vehicles, helicopters, as well as light aircraft or UAVs.