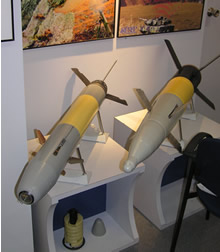 Artillery systems captured  significant attention at the exhibition. Improvements for the Bofors FH77 currently in Indian service were presented by SWS Defense the company was willing to discuss some details about its proposal for the modernization of the 155/52 howitzer and the FH55BW autonomous, mobile (truck based) version. Soltam is currently converting Indian M-46 artillery to M-46S standard and is also competing on the upcoming Indian procurement tender for towed, autonomous gun systems. For this program Soltam proposed for this program the autonomous ATHOS 2052 155mm /52 cal system. the company also offers a truck mounted artillery version – ATMOS which was recently chosen for the ATROM program in Romania. South African Denel which is also competing for the lucrative Indian program was also represented with a broad range of artillery systems. The company displayed the Condor T-5 155mm/52Cal truck mounted gun, and the autonomous T-6 self propelled guns, both seem of interest for Indian procurement programs. Another system, the LWSPH was presented by Singapore technologies Kinetics. Two self propelled advanced mortars were also on display – Soltam’s CARDOM and ST Kinetics Super Rapid Advanced Mortar System (SRAMS) – both 120mm mortar systems.

Responding to the Indian enthusiasm for artillery employment, several companies also promoted advanced dedicated maintenance and support systems for artillery. AGI Ltd from the UK presented the AGICAM, a visual inspection system used for inspecting the barrel bore gauges. The camera is inserted into the barrel and provides either 360 degree peripheral view or a detailed focus on a particular area in more details, by utilizing a 90 deg. Viewing head. The images are sent to the inspection system via wireless link. A different inspection system developed by AGI is the BG20, which monitors the wear along the bore of the gun barrel. Software tools enable filing and storage of measurements by individual barrels, and tracking of specific units approaching or exceeding tube abrasion. Another system, Solclean, was demonstrated by Soltam, The semi automatic cleaning system handles 76-155mm, rifled or smooth bore barrels in 1 – 4 hours, using a special chemical foam for removing copper, brass and normal combustion residues without the use of ammonia or abrasive materials.