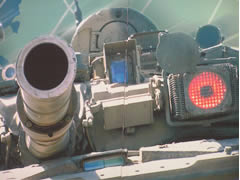 A typical deployment of IR jammer can be seen on the Russian T-90, which mounts the Shtora-1 Defensive Aids System (DAS) shown on picture, with Kontakt5 ERA modules (left). The system protects the tank against guided missiles, using both the semi-active command to line of sight (SACLOS) guidance, by an IR source that mimics the flare on the back of missiles, as well as laser beam riders and laser-homing weapons. It should be effective against missiles such as the TOW, HOT, AT-4, AT-5 and Sagger (Malyutka). The Russian system also has some capability to counter laser-guided munitions and ATGMs (Such as Hellfire, Kornet etc).

Shtora-1 uses a laser warning device operating in the 0.65-1.6 micron range, comprising of an array of coarse (photo below right) and fine resolution (photo below left) sensors, mounted externally on the turret. Each of the rough (coarse) laser sensor covers a sector of 135 degrees, while the fine sensor covers a 45 degrees, with 3.75 degrees angle of arrival resolution, and -5 to 25 deg. elevation coverage. The system can automatically slew the turret and gun at the direction of the threat, to optimize the deployment of a thermal smoke screen or activation of active protection systems. The sensor detects laser illuminating and alerts the crew and defensive systems. The warning display provides the commander and gunner with threat warning cueing, by sector (at a resolution of 5 degrees) and at a resolution of 3.75 degrees at the 90 deg. frontal arc. The display also provides jammer and countermeasures status indication. Countermeasures can employ a 81mm thermal instant smoke grenades, which deploy an instant smoke screen at a range of 50-80 meters from the tank, within 1.5 – 3 seconds. The 20 meter wide, 15 meter high screen blocks visual, thermal and laser (0.4 – 14 micron) wave bands. The system also employs a pair of electro-optical jammer, designated TShU1-7, which “hijacks” the missile’s command link by feeding the tracker with modulated signals that cause the missile to deviate from its course, and away from its intended target.