LAHAT was designed by IAI subsidiary MBT to meet the requirements of the armoured corps. Utilizing the semi-active laser homing guidance method, LAHAT can be designated by the firing tank or by an indirect designation, by another tank, helicopter or forward observers. Firing the LAHAT requires minimal exposure in the firing position, (commander’s sight only) as the designating tank (not necessarily the firing tank) has to maintain line of sight to the target throughout the flight of the missile.

With a low launch signature (flash and dust), the firing position is very difficult to detect, from all ranges. The missile’s trajectory can be set to match either tank (top attack) or helicopter (direct attack) engagements. Flight time is longer than kinetic ammunition (14 seconds at 4,000 meter range) but since target designation is required only for the final phase of the flight, the tank can fire the LAHAT from hidden position or use remote designation for maximum protection. Finally, the missile uses a tandem warhead which can defeat all modern armor, including add-on reactive armor. The main warhead has a high penetration capability of 800mm, defeating all known armored vehicles at high impact angles typical of top attack trajectories. The introduction of LAHAT to conventional tanks requires minimal modifications, replacing the laser rangefinder with LRF/laser designator module, and inclusion of LAHAT programming in the fire control computer. The LAHAT is stowed like other rounds in the ammunition rack, and handled just like any other type of ammunition. 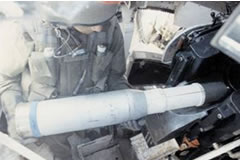 The LAHAT missile has a range of 8 km when launched from a ground platform, and up to 13 km, when deployed from high elevation. The missile hits the target at an accuracy of 0.7meter CEP and an angle of over 30 degrees, providing effective penetration of up to 800mm of armor steel by the high performance warhead. The missile weighs 13kg, and a quad launcher which can be carried by ground or aerial platforms, weighs 75kg, including four missiles. A variant of the Lahat guidance system is also designed as an upgrade kit for 2.75″ rockets offering high precision and minimizing collateral damage when such weapons are used low-intensity conflicts and urban warfare.

LAHAT is designed to match all types of 105 and 120mm guns, including low recoil guns. It fits well with the 105mm Low Weight guns, designed for arming light attack vehicles such as Centauro, AMX-10RC or LAV-III. Unlike other tank rounds, LAHAT does not need a tank gun for operation, in fact, LAHAT modifications are already considered with 106mm recoilless rifles, BMP-2 APCs, Humvee all terrain utility vehicles and as self protection for air defense elements, on the M-163 Vulcans. According to Aviation Week, Employing LAHAT missiles from Hunter UAVs was also planned by the US Army.

IAI has recently completed a successful series of test firing on the Arjun tank in India, and is negotiating local production if a planned procurement of Lahat for the entire Arjun fleet planned for the Indian Armor will materialize.