Key capability of the system is its interoperability with the Stryker family of combat vehicles, attained through a Stryker Vehicle Integration Kit (VIK). When mounted on the vehicle, VIK provides voice intercome and radio communications, data communications and electrical power recharging connectivity through an umbilical connection. Voice and data connections are provided through an extension of the individual soldier’s personal Area Network system, providing intranetworking between team members as well as radio and data connectivity with external sources, carried through the vehicle’s intercom system. On dismounted operations, soldiers will have full communications via the vehicle’s radios and data systems, as long as they remain within wireless network’s effective range. When mounted, each soldier will also have seamless synchronization of tactical information, via data connection with the Army Battle Command System (ABCS) through the vehicle’s FBCB2 system. Prior to dismounting, the system will provide an update position of all associated elements, as received from the vehicle’s GPS system. The VIK will have battery recharging racks to replenish batteries drained during dismounted operations. 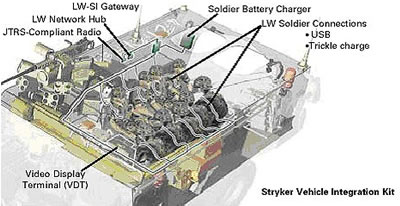