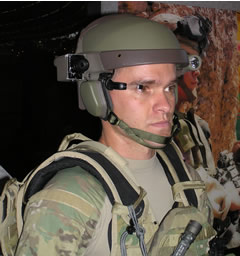 The basic Land Warrior suit includes weapons,sensors such as laser rangefinder and day/night cameras, clothing, protection system integrated with load carrying equipment, and headgear, based on a helmet, equipped with integrated speaker, microphone and optical display. The system’s hub is the mission computer which interfaces with all system’s components via a 10 port hub. The computer links directly with the squad communications and ‘leader communications’ systems; it also manages the system’s sensors and displays, runs various navigation and situational display functions and as well as display and power management. The system is powered by rechargeable batteries with mission endurance of 6 – 10 hours. The initial systems were designed with dual processor architecture, but following initial trials, shifted to a simpler, single processor system. Another improvement included the shift from Windows based operating systems to Linux, which proved to be more reliable.

The intra-squad radio uses a helmet mounted antenna, operating a wireless local area network, covering up to 1,000 meters with line-of-sight communications. The Land Warrior system operates in a soldier-to-soldier wireless network, for short-range data and voice transmissions. The current system uses the Multi-band Intra-/Inter-Team Radio (MBITR). The helmet also mounts an Active Matrix organic light emitting display providing a field of view equivalent to two 17-inch computer monitors placed in front of the soldier’s eyes. It presents the Daylight Video Scope (DVS) and Thermal Weapon Scope (TWS), as well as text messages, maps and satellite images which can be downloaded in about 8 minutes. Maps are displayed to all team members. Display control and interface are provided by a mouse and weapon mounted programmable switches. Each member of the team is identified by an individual Subscriber Identity Module (SIM) card. The SIMcard also determines the echelon and role of the user – team, squad or company, commander, sniper, support team, rifleman etc. Individual members will have access to a different set of assets and capabilities and automatically get specific “packages” of information. Commanders can also use the Commander’s Digital Assistant (CDA) package, which is already fielded with combat troops on a ruggedized PDA. The system is equipped with 5 channel GPS receiver tracking the soldier’s position with approximate 10 meter resolution. A pedometer augments the GPS and tracks the movement of the soldier in locations where GPS coverage is unavailable. The location of each soldier is refreshed every 30 seconds, and transmitted over the intra-squad network for situational pictures updates. Two rechargeable batteries are currently provided for each suite, to power the sensors and systems for 4 – 6 hours. Batteries are located on the right and left sides of the soldier’s belt. Alternative primary batteries can also be used for extended missions of up to 10 hours.

The current Land Warrior suits utilizes the M4 Carbine, equipped with picatinny rail mount for the thermal sight, daylight video scope (x1.5 – 6 zoom available) and a multifunction laser, providing target marker, azimuth and rangefinder. The new XM-8 rifle could replace M-4 as initial suits are deployed in 2006. Day and night sights render aiming crosshairs superimposed on the helmet mounted sight to enable effective non-line of sight weapon’s aiming and target acquisition behind coverage. The weapon has three programmable buttons for push to talk (PTT), switching screens on the helmet mounted display and saving snapshot pictures as displayed on the viewer. The weapon is connected to the hub via an umbilical cable. 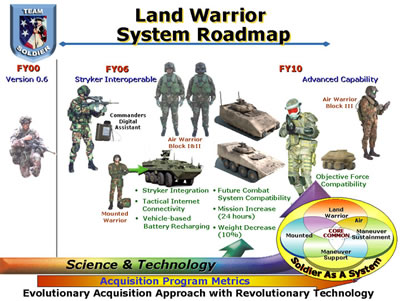