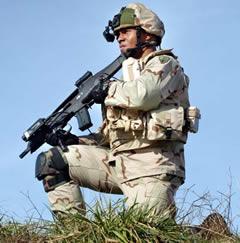 The goal of Land Warrior is to enhance a soldier’s mobility, situational awareness (command and control and communications), lethality, sustainability and survivability. According to its original schedule the US Army planned to field the Land Warrior Initial Capability (IC) systems in 2004. According to the revised schedule, only test items will be deployed in October 2004 with initial systems supplied only Special Operations and Ranger battalions but even these are not being delivered and the entire program is shifted to start in 2006.

Operational testing of improved, more mature Land Warrior suits will be with mechanized Infantry Stryker brigades, redesigned as Upgrade I, or Stryker Warrior systems. Such testing is currently planned toward 2006. Despite the delays, the program is maintained at a high priority, and is now managed in a faster spiraling development path, pushing subsystems to the field as soon as they mature. Among the near term applications resulting from this process included issue of personal protection body armor improvements, lighter-weight helmets and the Commander’s Digital Assistant (CDA).

The integration and optimization of Land Warrior components and suits focusing on Upgrade I phase, optimized for the infantry teams operating with the Stryker APC. Future Stryker infantry teams will be able to utilize their Stryker Warrior combat suits for mounted, as well as dismounted operations. Through 2015, the U.S. Army is expected to procure up to 34,000 Land Warrior suits at a total program cost of around $8 billion.