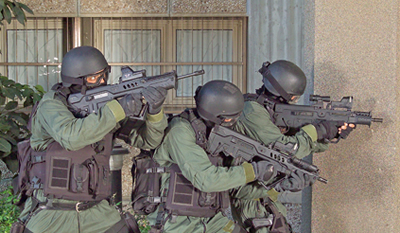 Tavor, the new Israeli assault rifle is lightweight, compact and ergonomically designed to become an ‘organic’ part of the warfighter. It has already been chosen to arm the Israeli (IDF) and Indian elite troops, and is aggressively marketed worldwide, to become a weapon of choice for future infantry combat suits. Tavor is based on extensive research and development and close cooperation with the Israel Defense Forces. It was selected by the IDF in 2003, following an extensive competition against the M-4. The plant is gearing up to serial production delivering thousands of rifles starting 2006. TheGivati infantry brigade is the first unit to be equipped with the new rifle, gradually fielding the new weapon, beginning with all Summer 2006 new recruits. By March 2007, the Golani infantry brigade and the Kfir infantry brigade are scheduled to get the new weapons, completing the initial procurement batch of 15,000 assault rifles. 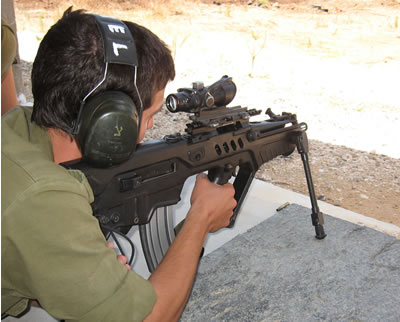 Tavor assault rifles were tested extensively through three years with field units, modified to respond to evolving requirements realized during actual combat engagements in urban combat and special operations. Tavor was selected to be the future assault rifle for the IDF infantry units, and the weapon of choice for the IDF future infantry combat suits, replacing various types of M-16, M-4 and Galil. In 2004 India became the second country to choose Tavor for its elite troops. Georgia reportedly selected the weapon for its special operations units.

Unlike conventional assault rifles, Tavor was developed to produce effective, fast and accurate fire in all conditions, including close combat. Its ergonomic design enables the soldier to operate the weapon as part of an integrated weapon system – such system does not rely only on technology, the system must rely on the human senses and capabilities, and respond best to the human needs. Tavor is well balanced and easily operated with a single (right or left) hand. Specific models can be configured for right or left handed users. With its integral optical sight, it can be aimed and fire accurately with both eyes opened, maintaining constant eye contact with the target, improving the soldier’s peripheral vision and maintaining effective situational awareness. The compact weapon fits comfortably, aimed instinctively and fired instantly and effectively even by a heavily loaded warfighter, in tight enclosures, where the use of longer weapons is impractical. All Tavor models use flat-top design to accommodate advanced sights and accessories. The current model selected by the IDF is produced of black composites (the original was olive green), some models, such as the sharpshooter version (shown in the picture above) uses Mil-Std 1913 (Picatinny) rail attachment mounting optical sights and other accessories. All versions have a foldable iron sights for backup.

Tavor family includes three different models – TAR 21 assault rifle, slightly shorter TAR C21 designed for paratroopers and commanders and TAR S21 optimized for sharpshooters. The version taken by the IDF uses an integral sight, either the ITL MARS or self-luminous reflex sight Mepro-21, produced by Meprolite (the latest version of this sight is shown at the bottom of this page). The commander’s version TAR C21 can also use a combination of a reflex sight and telescope, or reflex sight and camera, configured for integrated combat suits. A sharpshooter version, TAR S21 also mounts a bipod and 4X telescope for precision firing. All weapons share a common bull-pup configuration use a common platform, with different barrel lengths. The Bull-Pup design enables Tavor to maintain short and compact dimensions with a long barrel. The standard rifle measures 725mm and uses a 480mm barrel (TAR21/S21) while the smaller (640mm total length) C21 has a 380mm barrel. The total weight of the weapon ranges from 3.18 kg for C21 to 3.67 kg of the fully equipped S21. A wide range of sights is available for the Tavor, including the  MARS integrated laser pointer and reflex sight night vision 3X magnifying sight, day telescope with 4X magnification, 3X daylight or night vision viewer mounted behind the reflex sight, enabling day and night operation without sight change, special reflex sight for the grenade launcher. Other accessories include 40mm grenade launcher kit, silencer, 20 or 30 round magazines, clip for two magazines, etc. Tavor is capable of sustained rate of fire of 750 – 900 rounds per minute. 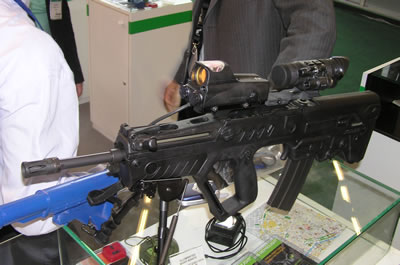