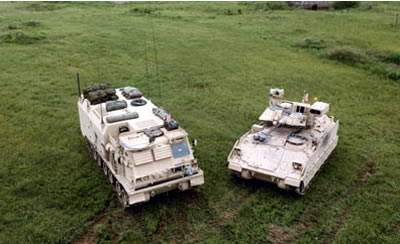 For more than a decade, military Command, Control and Communications (C3) systems benefit from the rapid pace of development of consumer mobile wireless communications and computing products. In sharp contrast to the past time, when military communications were far more advanced than commercial systems, contemporary personal communicators (mobile phones, PCS, PDAs and other gadgets) are providing far better performance than any military device, and are available for a fraction of the cost of military devices.  Modern soldiers are better prepared to use computers and accept them as an essential part of every mission. Therefore, fielding of more complex systems is now feasible and affordable than ever before.

Military Cellular Networks
In recent conflicts, such as Operation Iraqi Freedom (OIF), it became clear that such networks cannot keep pace with rapid movements, and the nodes presenting priority targets for enemy attack. To support users on the move, the US Army and some NATO countries use dedicated military “mobile subscriber” networks (MSE), operating similar to commercial cellular wireless networks. While supporting users on the move, such systems rely on stationary nodes to maintain an efficient area coverage. Commercial systems based on GSM, TDMA, CDMA and IDEN are used primarily as backup networks, with voice and data support. But these networks are not reliable enough for military use as they lack availability, redundancy and required military security levels. The third generations (G3 systems) of such systems, currently deployed in few countries, could offer more advanced services but it is not available on a wide basis which could support dependable military or homeland security applications.

Even the standard Cellular systems are offering advanced services, well beyond the capabilities of available modern military systems. Commercial networks are used by the military mainly for general purpose services during peacetime, for coordination activity and personal communications. Military forces are adapting the commercial TETRA standard to field mobile networks for military and security forces. Such systems are currently fielded with French forces (utilizing the Tetrapol standard), British forces, Finnish (based on Nokia systems, operated as part of KFOR in Bosnia). The US Defense Department has also embarked on a program to develop and produce secure PDA Phone supporting commercial GSM and CDMA networks, for military and homeland security applications. The largest system of this type has been fielded recently in Israel by Motorola (the IDF new “Mountain Rose” – TETRA based military mobile cellular system). TETRA systems as well as commercial cellular services are  planned for migration to G3 standards later in the decade, and further enhance interoperability, with the introduction of software defined radios such as the JTRS, which will enable seamless integration of wireless and wire-line systems into one “mesh”.