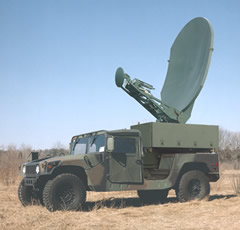 Future concepts currently under consideration call for the deployment of a global grid of communications satellites that could support the warfighter, enabling flexible command and control of task forces anywhere in the world. Such networks will utilize new EHF satellites (follow-on to the current Milstar program) and will seamlessly integrate the local combat net radio with the strategic global network, facilitating effective access to all levels of command and military operations anywhere in the world.

Due to the high cost of satellite systems development and operations, outsourcing of services is considered by many nations. In the UK, the Skynet-5 military satellite is being evaluated as a private venture. The program is under development and the system is expected to enter service by 2005. The French Syracuse III military satellite constellation is also offered for rent, to the German government and Army. Belgium and the Netherlands have also expressed interest in such arrangements. Israel is licensing commercial traffic on the Israeli Amos-2 and other communications satellites, and is also planning to deploy a dedicated military SATCOM later in the decade. NATO is still utilizing its NATO IV system, which is due for replacement in the near future. Candidates for such replacement are Syracuse III, Skynet-5 and Milstar. Turkey is planning a large scale investment in space, including enhancement of its satellite communications infrastructure.

The satellite network can support thousands of terminals in net-centric system formation. For redundancy, the network can use multiple satellites or other types of communications.

For mobile operation, SATCOM terminals using commercially available Ku-band already provide data rates up to 512 Kbps on the move. When a vehicle comes to a halt, performance increase dramatically to two, and up to five Mbps. Future SATCOM on the move technologies are currently in development for commercial and military applications. Such systems are part of the WIN-T program, which will utilize future Ka band satellites and dedicated terminals to provide 1Mbps continuous data rates to command elements on the move.

Military grade on-the-move SATCOM ground terminal must provide continuous connectivity in conditions where commercial terminals usually fail. They must be able to automatically and rapidly recover from signal blockages, due to man made objects, terrain/foliage, weather and other atmospheric effects. Such terminals are designed to work with a wide range of military and commercial satellite services, including wideband commercial Low Earth Orbit (LEO), Medium Earth Orbit (MEO), and Military Geosynchronous Earth Orbit (GEO) satellites, as well as Protected (Advanced EHF) Narrowband Satellite communications.