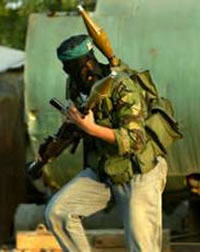 RPG-7 is a reloadable, shoulder-fired, muzzle-loaded, recoilless antitank and antipersonnel rocket-propelled grenade launcher that launches fin-stabilized, oversized rocket-assisted HEAT grenade (85-mm in the PG-7 version, 70-mm in the PG-7M) from a smooth bore 40mm tube. The launcher with optical sights weighs 6.9 kilograms (15.9 pounds) and has a maximum, effective range of 300 meters against moving point targets and 500 meters against stationary point targets. 500 meters is also the maximum range of rocket-assisted flight, which enables a flatter trajectory and more accurate aiming. The RPG-7V is light enough to be carried and fired by a single operator. An assistant grenadier deploys with the shooter, to the left of the gunner to provide cover with his personal weapon and reload after fire.

The shooter normally carries two additional rounds of ammunition, and his team member three more rounds. The use of the weapon is fairly simple. Without much practice, a user can hit a vehicle sized target most of the time at ranges of 50-100 meters. More practice enables engagement of targets at extended range, which also provides relative safety to the user. At the maximum range of 920 meters, RPGs self explodes (4.5 seconds from firing) and that’s how the weapon is sometimes used as a form of “artillery”, spraying shrapnel over military installations, or slow, low flying or hovering helicopters. The antipersonnel grenades reach over 1,100 meters. Following the conflict in Afghanistan, new anti-personnel grenades were added. A modified version, PG-7BR (VR for the RPG-7V1) is also designed to defeat reactive armor. It uses a precursor charge to eliminate the reactive armor and the main charge to penetrate the main armor. Basalt, the original RPG manufacturer currently offers the RPG-7V1 40mm launcher, which weighs 6.3 kg. It is available in two versions, the standard unitary tube at a length of 950mm and the RPG-7D which can be split into two sections, measuring 630 mm when packed for transportation or airdrop. The PRG-7V1 can fire 4 – 6 rounds per minute, and can be equipped with PG-7V shaped charge, PG-7VR tandem shaped charge, both are designed to penetrate over 500 mm of steel (600 mm behind ERA in PG-7VR, which can also penetrate two meters of brickwork, 1.5 meters of reinforced concrete and 3.7 meters of log or sand). The RPG-7V1 can also fire the TBG-7V thermobaric or OG-7V fragmentation charges.

Basalt has also designed further advanced versions, including RPG-26 and RPG-27, with an effective range of 200-250 meters for anti-tank, anti-personnel and anti-material missions. Thermobaric warheads were also adapted for RPGs with the RShG-1 and the RShG-2. Both are optimized for operations in enclosures of up to 200 cubic meters and can create a devastating effect in a trench or within a bunker or building even when they explode at a range of 1.5 – 2 meters from the target. For the RPG-7V1 the TBG-7V thermobaric round uses a 4.5kg 105mm warhead effective at a range of 200 meters (maximum 700 m’). The kill radius of this rocket is 10 meters. The latest version available is the RPG-29, available in tandem-HEAT and thermobaric versions.

The current RPG-7V model can mount a telescope and both infrared and passive night sights. All RPG-7 models have optical sights which can be illuminated for night sighting.

Among the production grenades are the PG-7, PG-7M, PG-7N, The PG-7V rocket has a penetration capability of 330mm of steel armor. PG-7VL antitank grenades with armor penetrability of up to 600 mm of rolled homogeneous steel. The PG-7VR is a tandem warhead designed to penetrate explosive reactive armor and the armor underneath. The OG-7 and OG-7M are high-explosive antipersonnel grenades. OG7V is a 2 kg, 40mm fragmentation warhead effective at a range of 350m effecting a kill area of 150 square meters (about seven-meter radius from the point of explosion).

The RPG-18 is another derivative of the original RPG. It was designed as a short-range weapon, The tube-launched, disposable launcher contain a single 64mm PG-18 rocket, similar in principle to the US LAW system. The operator carries the launcher in a collapsed position and extends the inner tube to make the weapon ready to fire. The weapon has an effective range of 200 meters, with a HEAT warhead which is capable of penetrating up to 375 millimeters of steel armor. The fuse of the HEAT grenade activates 2 to 15 meters after leaving the tube and self-destructs after a flight time of 4 to 6 seconds. The folding sight at the forward end of the tube is calibrated for ranges of 50, 100, 150, and 200 meters.