Explosive Reactive armor (ERA) is a common form of add-on armor, used on many Armored Fighting Vehicles (AFV). This concept is combat proven. Protection by explosive modules was deployed by the Israel Defense Forces in the late 1970s, and was first, and successfully used in combat with the Israeli Army M-60s and Centurion tanks in the 1982 War, and later, by the Russian Army by the mid 80s. Reactive armor utilize add-on protection modules conforming of thin metal plates and a sloped explosive sheath, which explode when sensing an impact of an explosive charge (such as High Explosive Anti-Tank – HEAT projectile).

The ERA enables a significant increase in the level of protection, primarily against shaped charges, without a proportional increase in the weight of the protected platform. The operating mechanism is based on an initiation of an explosion, that disrupts the plasma jet created from the shaped charge warhead as it penetrates the armor. The early models of reactive armor were considered effective against all types of chemical energy projectiles, primarily ATGMs and HEAT rounds but they did not have redundancy and offered limited protection against multiple attacks.  Modern reactive armor is designed to use a combination of energetic and passive materials and formation that can withstand multiple attacks. The modern modular armor is designed in smaller tiles, and more complex shapes that offer optimal plate slopes to counter potential threats.

A typical reactive armor suite was developed by RAFAEL for the Bradley M-2 Infantry Fighting Vehicle (BIFV), under cooperation between General Dynamics and RAFAEL. 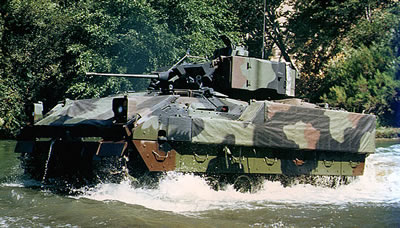 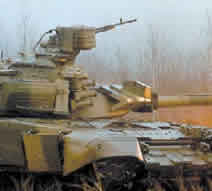 The latest version of Russian ERA, dubbed Kontakt5, deployed with T-80 and T-90 tanks. This version is believed to provide some protection improvements to counter kinetic energy (KE) rounds as well as shaped charges. (Photo at left shows Kontakt5 modules on a Russian T-90 Tank).

An advanced version of ERA is the Self Limiting ERA (SLERA). Based on better understanding of the dynamics of ERA based shaped charge defeat mechanism, modern systems are utilizing improved mechanisms, which utilize lower masses of explosives which could be classified as passive armor. These considerations have significant implications on the logistics, storage and handling of AFVs and protection systems, without degradation in the protection levels. Other applications of reactive armor are based on the use of reactive properties of the protection module, yet the initiation of such reactions are not triggered by an explosive charge. Another type of non-metallic ERA is the CLARA, developed by Dynamit Nobel. As Non-Explosive Reactive Armor (NERA) or Non Explosive reactive Armor (NxRA) modules do not use energetic components, and therefore are not consumed when being hit. Therefore, they provide an effective multi-hit protection capability which cannot be obtained by ERA or SLERA. Furthermore, the loads inflicted on the vehicle’s structure are much smaller and therefore, such modules can be applied to lighter vehicles. from the reactive armor system. The downside of  NERA is that while it is effective against CE threats, its performance is not sufficient when engaging KE threats. Scientists are predicting that future developments of NERA will be able to defeat medium caliber KE threats.

Further advancements of the ERA, considered for future implementation, include a “Smart Armor” concept that will has integrated sensors and microprocessors embedded into the armor, which sense the location, type, velocity and diameter of the projectile or jet, will trigger smaller explosive elements, to form an effect tailored against a specific penetrator. Another future version of the reactive armor concept is the Momentum Transfer Armor – which is also designed to counter KE threats. This technology is applicable for front and side protection, where adequate space can be allocated for such installation. The system will be activated by threat warning sensors that will detect an incoming projectile and launch a small steel bar in a direction perpendicular to the flight-path of the approaching threat. Such concepts are studied as part of futuristic armor concepts, among others to the US Army FSAP and French Leclerc 2010 concept.