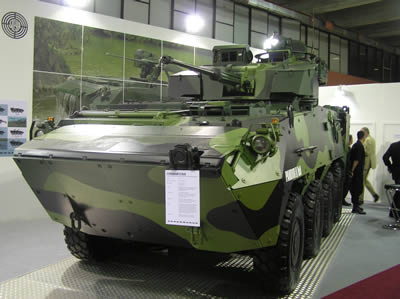 For its ground forces, the Greek Army has started to take delivery of the first Leopard 2 HEL tanks. In addition to the 170 tanks on order, Greece will also receive six Legun bridge-layers, 12 armored recovery vehicles, supported by a comprehensive training and logistical package. Procurement of additional 26 armored recovery vehicles was also planned. The Leopard 2 HEL program contributed significantly to improve the local industry, transferring technology to some 20 industries. KMW established its Hellenic Defense Vehicle Systems (HDVS) subsidiary in Volos, for the production of armor protection, suspension systems and other components. Also in Volos, METRA is responsible for welding and machining of steel parts. ELBO SA in Thessaloniki is responsible for the integration and assembly of the tanks. Intracom is responsible for the electronics and optronics systems.

Follow-on to the Leopard program, Greece is expected to decide on the procurement of 291 tracked armoured fighting vehicles. (Greece plans to buy Marder A3 AIFVs to be withdrawn from German Army service). The vehicles will be refurbished them with a new turret, gun and optronics. Greece is also planning to buy about 400 wheeled armoured vehicles – either 8×8 or 6×6 will be selected. The current program allocated 430 million Euros for 84 vehicles. Defendory was held at a perfect timing to shape the opinions and attitudes of top level decision makers about their forthcoming decisions about wheeled AFV programs.

Manufacturers of armoured vehicles brought the actual hardware to Athens, including the 8×8 version of the Pandur II, displayed by Styre, the AMV brought here by Patria and Centauro, displayed by Iveco. This program is considered to be among the largest pending procurements of 8×8 armored vehicles. Patria is well positioned to win in this market, producing AMVs to fulfil about 800 orders from Finland and Poland. By year’s end (2006) the company expects to complete production of the 200th AMV. The vehicle utilizes a uses an 8×8 chassis to support modular configurations, utilizing various levels of protection, armaments, and systems. Among these are the turreted vehicle, armed with an automatic 30mm canon, proposed for the Greek program, vehicle equipped with remotely controlled gun, self propelled dual-barrel or single barrel 120mm mortar, and other versions.

Greece is planning to withdraw 300 BMP-1 from active service by 2007. (100 units have already been transferred to Iraq). Once these vehicles are to be transferred to another user, there may be an opportunity for their upgrade. Russia is also realizing another opportunity for the amphibious capable BMP-3F marine combat vehicle which is offered for the special operations units of the Hellenic Ground Forces. It uses a modified propulsion system to steer the vehicle afloat, climb ashore without difficulty in up to sea state 3, employ its main armament (gun and missiles) at sea state 2 and endure and travel in water for seven hours.

Other procurement plans call for the acquisition of 50 amphibious assault vehicles and 209 light reconnaissance vehicles. Addressing this opportunity were KMW, with the Fenek, and Panhard, with the VBL, which is already in use with the Hellenic ground forces. In recent months Fenek has been deployed to Afghanistan where it was demonstrated as effective and capable of performing tough missions in extremely difficult terrain. VBL was displayed here in two configurations – an anti-tank missile carrier, fitted with the Russian Quadrat missile launcher, firing the KBP Kornet E anti-tank missileand the light patrol vehicle, equipped with RAFAEL’s mini Samson remotely controlled weapon station and acoustic gunshot detection system.