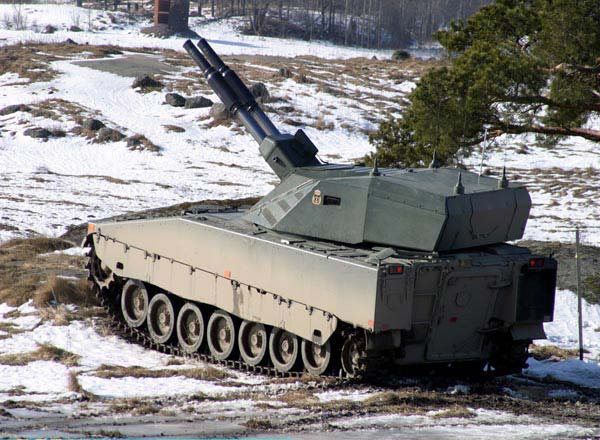 Developed as a joint venture between Patria Vammas (Finland) and Hagglunds (Sweden), is a twin barrel 120mm, breech loaded mortar turret mounted on wheeled or tracked chassis (tracked CV-90 and wheeled Pasi/AMV) carriers. The two mortars are mounted on a common cradle with equilibrator and a leading device. The system is designed for ultra-rapid fire rate, reaching a claimed 26 rpm burst, with multiple rounds simultaneous impact (MRSI) at 14 to 13,000m range.

The first complete Pasi-mounted unit (low-profile turret with autoloader and fire-control system) was delivered to the Finnish Army in October 2000. In 2003, 24 additional AMV based AMOS systems were ordered for the Finnish Defense Forces. The first two prototypes of the AMV/AMOS were delivered in March 2006.
One added advantage of the Amos is that the barrels can be lowered to deliver direct fire during urban warfare or other scenarios. An interesting derivative is the AMOS naval version. Designated Naval Application Demonstrator (NAD). A prototype has been tested on a Combat Boat 90 by the Swedish Navy. The ability to fire a mortar from a moving vessel at sea, should open new perspective for future in-shore naval combat support. Although an excellent technical design, the AMOS nevertheless seems to have an inhibitive price tag, which limits potential customer interest. It is believed that a shorter, muzzle-loaded variant has been proposed, to reduce the price.

In July 2006 the Swedish Defence Materiel Administration (FMV) has awarded a contract for the development and production of two prototype armored advanced mortar systems (AMOS) to BAE Systems Hagglunds AB. The two prototypes will be based on CV90 platforms and scheduled for delivery to the customer in early 2011. The CV90/AMOS configuration was recently shipped to Saudi-Arabia for field demonstrations. A single-barrel configuration of the mortar, named NEMO, was introduced in 2006 and have already won its first customer – the Slovenian Army.

The SEK 500 million order (approx US$70 million) includes options for maintenance systems, ammunition and preparations for a new battlefield management system. The Swedish prototype will be designed to be suitable for future installation on the SEP platform, the next-generation Swedish armored vehicle system. 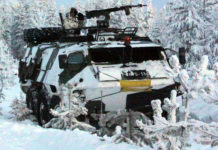