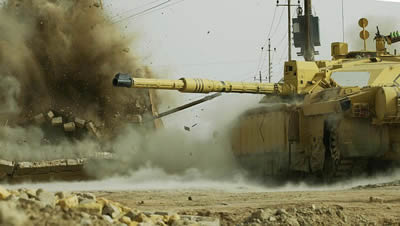 American casualties from bomb attacks in Iraq have reached new heights in the last months as insurgents improved their tactics, deploying more sophisticated improvised explosive devices (IED) targeting armored vehicles. In May 2005 alone, there were about 700 attacks against American forces using IEDs, the highest number since the invasion of Iraq in 2003. Attacks on Iraqis at recent months also reached unprecedented levels. Among the deadliest attacks was the destruction of a growing number of armored vehicles, including M-1 tanks, amphibious armored assault vehicles, Bradley armored vehicles, Stryker APCs and up-armored Humvees – all recently protected with various types of add-on armor.

So far, IEDs were made of roadside bombs, the most common were made of artillery shells detonated by a command wire or remote control. Such shells contain tens of kilograms of explosives which, when exploded, cause extensive blast and shrapnel but are less effective against armored targets. Troops started identifying the devices on roadways, often tipped off by the wires used to trigger them, so the insurgents began burying the devices under trash or hiding them in dead animals’ carcasses and detonating them remotely with cell phones and garage-door openers. The US forces already use some 4,200 portable electronic jamming devices including Warlock Red and Warlock Green systems. Among the known projects undergoing field tests, are the new Joint Improvised Explosive Device Neutralizer (JIN), using controlled directed energy and the Scorpion II Demonstration System, a transportable high-powered microwave system capable of disabling a wide variety of improvised explosive devices. Insurgents are countering these countermeasures by the use of infrared lasers command links, attached to IED detonators, thus bypassing the electronic jammers, used to pre-activate roadside bombs or block their detonation. After the troops started using specialized equipment to probe debris for suspected IEDs, the terrorists began disguising them better: atop telephone poles or buried behind concrete abutments.