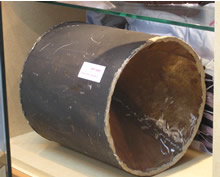 Shaped charge IEDs are not new in the Middle East insurgency wars. The IDF Bomb Disposal crews have uncovered, what they designate as Kela type IEDs, in Lebanon and in Gaza. Activated through catapulted triggering devices, the weapon uses an improvised chemical shaped charge type, between 10-50kg and can be launched from stand-off or electrical fuze from several meters distance. The initial types have been relatively ineffective against armored vehicles, but the heavier versions have caused catastrophic results in softer or lightly armored vehicles.

Other types of IED used by Hamas and Hezbollah are super-heavy “belly” explosive devices, also frequently packing some special types of shaped charge explosives to penetrate AFV hulls from the vulnerable bottom. Penetration by chemical jet stream into the fighting compartment activated catastrophic secondary explosions in unprotected internal tank ammunition stores. Israeli experts assumed that the know-how about the preparation and use of such devices was imported from Iranian demolition experts.

Accordingly, latest IDF versions of (Low Intensive Combat) LIC Merkava tanks have been fitted with armored steel base-plates, which can absorb the blast. US experts consider a similar trend to take place in Iraq, as know-how is transferred to Iraqi insurgents by Hezbollah and their Iranian Revolutionary Guard Corps sabotage instructors. Iraqi insurgents have already adopted such tactics utilizing a variety of shaped charges. Some have been hung from overpasses others planted on roadsides, One of the heaviest IEDs used so far contained 600 pounds of explosives placed in an under devastated an Amphibious armored vehicle killing four marines. Another ambush which used four stacked mines buried in a road, destroyed another amphibious carrier and killed 14 marines. Other methods of operations call for placement of heavy IEDs in road underpasses, and most lately – mounted in suicide vehicles.