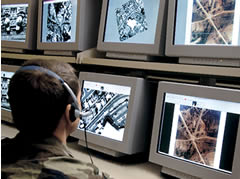 Earlier in 2006 the Distributed Common Ground System version 10.2 (DCGS) was fielded with U.S. Air Force elements in USA and Middle East Theater. A similar system is now under development for the U.S. Army. DCGS integrates multiple ISR sensors and systems across the battlefield, drawing intelligence data from various sources, and correlates that data into an integrated picture of the battlespace. The DCGS-A (Army) will extend this capability to ground elements. It will be deployed with fixed sites as well as forward, tactical and deployed forces, including units on-the-move. DCGA-A will integrate threat, terrain and weather data into comprehensive intelligence products, utilizing sensors data, intelligence and analyst resources available in the rear and at the forward area, increasing the capacity and quality of intelligence products while minimizing the forward footprint of ISR.

At AUSA 2006 Raytheon depicted the newly deployed Persistent Surveillance and Dissemination of Systems (PSDS2), which was established to address an urgent requirement for time sensitive targets engagement capability. The system was developed and fielded by Raytheon in 110 days. PSDS2 integrates various sensors, including artillery and mortar spotting radars, acoustic sensors, aerostat born RAID and PTDS systems and airborne UAVs. Automatic detection, cross cueing and correlation of sensors and fire units are employed. PSDS2 facilitates a centralized collection and storage of imagery and intelligence, supporting near-real-time and offline forensics and look-back for up to 24 hours.

L3 Communications’ Com-Cept Division is offering the Network Enabled Situational Awareness – Army (NESA2) for the integration of sensors and ISR resources available at the brigade level and below. The system networks existing sensors to accelerate and improve target location. NESA2 links the brigade’s organic sensors such as artillery locating radars, Sentinel air defense radar, JSTARS ground control segment, Prophet SIGINT system and Shadow or Warrior UAVs as well as theater assets such as the Guardrail / ACS. The system will establish a self-forming, software based sensor to sensor connectivity that will allow sensors to cross-cue each other, based on a set of rules that reflect the tactical commanders ISR/Targeting priorities for the area of operation. The system links to existing Brigade C4 systems and provides inputs to command other intelligence and C4 resources such as DCGS-A and Command Post Of the Future (CPOF).