The latest trend in C2 tech is Command Post Of the Future (COPF), a system currently deployed at division level, enabling division and brigade commanders to discuss and collaborate when processing information, share ideas, and attend virtual meetings without assembling at one place. As of October 2006, over 500 units are operational with US forces in Iraq. 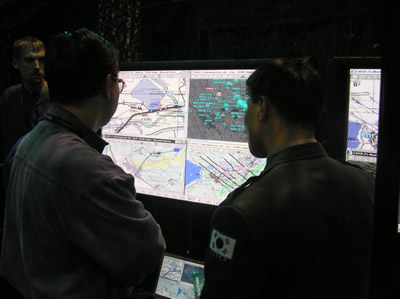 CPOF runs on a commercial off-the-shelf computer workstation with three screens that provide a shared environment that distributes, manipulates and displays, current operational information about the locations of all friendly units, known enemy forces, and relevant operational plans. Information, including images and data, is seen in two and three dimensions across the distributed workspace. Commanders can be better informed and thus make better decisions, by sharing situational awareness and collaborating with headquarters.

Commanders attending the virtual meeting do not have to attend in the same location, or even the same country, to discuss and draw on the same map. CPOF was developed as a technology demonstration by DARPA. The prototype was deployed with the 1st Cavalry division and is currently operating in Baghdad, connecting the division HQ and five brigades. DARPA is expanding the system with the introduction of advanced visualization tools such as multi-screen video wall, video and audio conferencing and online collaboration tools, allowing brigade commanders to communicate, collaborate and share information. The first unit receiving the enhanced CPOF was the 3rd US Infantry Division. The program transitioned from DARPA to the Army in February 2006. CPOF is now managed by PM Battle Command at Ft. Monmouth, NJ, which directs the program’s deployment, sustainment and feature development for the Army. In May 2006, the U.S. Marine Corps launched an engineering design to determine how CPOF could be integrated into its Combat Operations Centers. CPOF was also used in the U.S. Air Force’s Joint Expeditionary Force Experiment 06 (JFEX 06) at Langley AFB, Va., and the U.S. Joint Forces Command Urban Resolve 2015 series of experiments in October 2006.

CPOF enables forward command elements to reduced staff to operate C2 systems. In the distant future, advanced CPOF systems will eliminate parts of the brigade’s Tactical Operations Centers (TOC) primarily the forward and assault TOC which could be transformed into virtual TOCs. COPF relies on wideband data-communications links currently available to the Army, via military and commercial satellite communications services. The commander’s battleboard is interfaced to the system supporting all communication, collaboration, and information feeds he needs.

The system is maintained as “liquid information” in database format, which separate the data from the viewing space. This method enables faster visualization and optimal maintenance of large volumes of constantly changing information. The system gathers real-time and near-real-time feeds from multiple C2 applications. Constant monitoring of the battlefield is provided, by tracking the combat elements on maps or satellite photos and video feeds from battlefield sensors, following enemy forces through intelligence reports, ground observations, forward units or UAVs. Commanders no longer have to call on the radio to check the status of each unit. CPOF support commercial presentation style briefings, including map, photos and video. The participants can respond, sketching out their comments on the shared “Battleboard” presented in each location and at the central CP’s video wall. The Agile Commander program provided a scalable, reconfigurable operator environment which enabled commanders to access all command post information and functions anywhere, anytime, utilizing advanced MOSAIC and Global Mobile networking.

October 6, 2011: As part of the planned enhancements under a $78 million two year contract awarded to the manufacturer, General Dynamics C4, CPOF’s collaboration capabilities will be expanded, with users able to see and share information from multiple control systems, including ground, aviation, logistics, fires and airspace control systems. The system will also integrate the ‘next-generation command and control architecture’, increasing the number of concurrent users sharing the same information from hundreds to thousands. This will allow users who are purposely or inadvertently disconnected from the network to continue their collaborative efforts without interruption to operations or loss of data. The work done to enhance the collaborative command and control capabilities for the CPOF system directly supports the Army’s Mission Command Collapse initiative in which several mission command and control systems are collapsed into a consolidated product line.