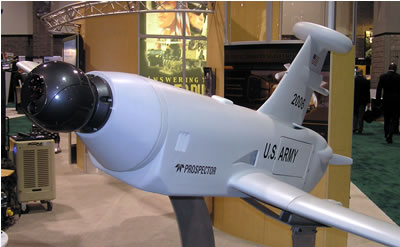 Among the unmanned aerial systems (UAS) shown at AUSA 06 was the ducted fan Micro Air Vehicle (MAV), selected in 2006 to provide the basis for Class I UAV (man portable) for the FCS program, it is designed to closely support warfighters in both urban and open terrain. Honeywell also displayed a larger model, designed for DARPA’s Organic Air Vehicle II program (which also corresponds to the Class II UAVs under evaluation for the FCS program). It will be powered by a 40 hp heavy fuel engine, and carry 16 pounds (7.25 kg) of mission equipment package, on two hour missions at ranges up to 10 miles (16 km). It will incorporate an active collision avoidance system.

The Israeli Skylite mini UAV developed by RAFAEL was displayed here. During the exhibition, the company reported the successful completion of a demonstration of an integration of the mini UAV, operated within a shared command, control and communications system with SPIKE ER multi-purpose guided missile, providing real-time targeting facilitating ultra-rapid kill chain. Teledyne Brown Engineering displayed a derivative of the German KZO UAV, fitted with a heavy fuel (JP8) engine. The company is proposing this vehicle for the US Army FCS Class III UAV program. Designated Prospector A1, the UAV is proposed of ISR, targeting, ECM/ESM and communications relay missions. The requirement for all-terrain operation is addressed by rocket assisted or catapult launch takeoff and parachute plus airbag retrieval system. The UAV weighs 355lbs (161 kg), flying missions of 6 hours at a loiter speed of 65 knots (120km/h). It can carry payload systems at a total weight 110lbs (50kg).

Small UAVs are generally lacking persistence and payload carrying capacity for extended missions. A new concept of UAV is Micro LEAPP, based on the Altair’s “Parafoil” system. It weighs about 75lbs (34kg) and will be able to lift up to 30lbs (13.6kg) of payload for missions of four hours. A different concept for persistent presence is the Finder – an expendable UAV deployable from aerial vehicles such as the MQ-1 Predator was developed by SAIC. Finder is a low cost, (optionally expendable) vehicle autonomously navigating following pre-loaded waypoints, (can also receive new directions while on a mission). It can be launched from a runway, catapult or by air insertion from another aerial. Finder will be able to enhance the mission flexibility and effectiveness of the Predator UAV, by pursuing low level missions into high threat area. At a total weight of 60lbs (27.2kg), Finder can carry an EO payload of 11lbs (5 kg), has 100 watts of available power, and endurance of seven hours. 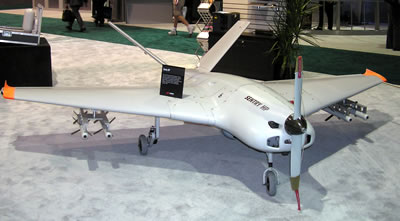 Other expendable payloads carried by UAVs were displayed here. A lightweight weapon designed for UAVs is the Spike laser guided missile, carried by the Sentry HP UAV, developed by DRS. A different payload is the U-ADD payload carrier, which can be used as a weapon carrier deploying the Clean Area Weapon System (CLAWS), an augmented area effect weapon developed by Textron Systems. U-ADD can also be used for urgent delivery of critically needed supplies – packed with supplies and a parachute, to deliver urgently needed supplies to isolated ground forces. A similar concept called QuickMEDS was developed by Dynetics, responding to an urgent U.S. Army requirement. When delivering heavier supplies, a GPS based parafoil/parachute combination can be utilized for precision delivery. Systems such as the Onyx, developed by Altair, enable precision drops from high altitude (35,000 ft) well above the reach of enemy air defenses. 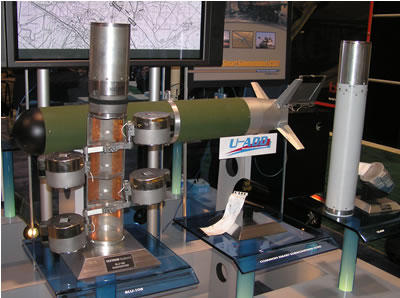