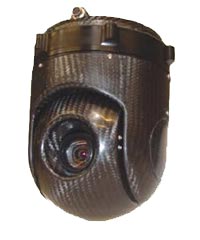 Applied Signal Technology (AST) is offering several types of electronic payloads enhancing target acquisition and identification from unmanned aerial systems. These include the Model 580 STYX small-size wireless interrogator, designed for interrogation of wireless communications using CDMA protocol. The system weighs only 7 pounds and consumes 7-12 watts that actively interacts with the cell station to obtain a mobile identification of dialed numbers from cellphones operating at any direction, over a distance of about 100 meters. Targets at longer distances can be obtained using directional antennae. STYX can operate in stealth mode, without any interruption of calls in progress. Alternatively, the STYX can operate passively to collect cal activity messages from a base station and nearby cell phones, including SMS messages, paging messages and responses and calls.

Another COMINT system developed by AST for UAVs is the Hydra. This system integrates adaptive beam forming and direction finding systems configured into small-size package. The system uses a software defined radio architecture to host a variety of signal-specific applications. The prototype Hydra has eight RF channels covering the 20-3000MHz range with 25 MHz IF bandwidth. The system weighs 30 pounds and consumes 180 watts. Further enhancements of the Hydra will include GSM identification and monitoring of GSM emitters, including the ability to geolocate each emitter.

Cubic Corp. and Rockwell Collins performed the first successful flight test of the Mini Common Data Link (CDL) system linking a King Air aircraft and a KillerBee unmanned system with ground stations. The prototype M-CDL weighs 1.5 pounds and demonstrated communications over a distance of 20 miles transmitting signals at data rates up to 10.7 Mbps. The tests support the US military’s goal of developing CDL terminals that meet the payload restrictions of small unmanned aerial systems (SUAS) platforms and enable data link communications with current ground systems. Existing CDL systems are too heavy and too large to fit within SUAS platforms. The Mini TCDL is designed to operate at rates up to 45 Mbps and achieves interoperability with other vendor units through compliance with current DoD CDL waveform specifications.

A new datalink innovator at AUVSI was Enerdyne Technologies, a subsidiary of ViaSat. The company that specialized in video compression is now introducing a conversion system enabling analog datalinks to transfer digital signals at high data rates. Analog links are s widely used with current UAVs, including most of the MALE, SUAVs, mini and micro UAVs. The system uses a signal modulator that ‘superimposes’ a digital protocol over a standard analog link. After the conversion the link can carry digital data rates of 4-5 Mbps data. The signals are demodulated at the ground station using a special receiver provided by Enerdyne. The airborne segment weighs only four ounces (100 gr.) and its power consumption is very low. It can be installed in a UAV within few hours.

Cloud Cap Technologies offers several versions of its lightweight payload known as TASE weighing about 1 kg. The payload can accommodate a number of sensors, including daylight cameras such as the Sony EX980S with x26 zoom or EX480C with 18x zoom. A range of FLIRs is also available for this payload, including the FLIR Photon Block II core (324×256) with a single or dual lense, Thermoteknix Miricle modules (384×288 or 640×480) or a Short Wave InfraRed (SWIR) 320×240 sensor from Goodrich. Cloud Cap also offers a unique mechanism retracting the TASE gimbal into the aircraft to support belly landing or other operations. The entire mechanism adds only 280 grams to the payload weight while eliminating the need for much heavier parachute, airbag or landing carriage.

Controp Precision Technologies from Israel, a pioneer in the field of miniature EO turrets for UAVs, unveiled enhanced versions of its STAMP miniature stabilized payload at AUVSI 07, introducing an operational Uncooled IR sensor packed version (U-STAMP) for the first time. This payload weighing only one kilogram is designed for nighttime missions, and, according to Controp, has already been delivered to several customers worldwide. According to Controp, the 3 axis gyro stabilization of the STAMP platform’s line of sight provides unique attributes to this turret, including highly stable video imaging including high quality pictures in full zoom, without vibrations or jittering, It also provides continuous target tracking regardless of aircraft attitude and motion. Wide field of regard and the ability to ‘point to coordinates’ makes this small payload simple to use and highly efficient when operated by ordinary soldiers.

Enabling effective tactical battlefield reconnaissance/surveillance from UAS or manned platform applications, today’s unmanned/manned vehicle platforms need superior all weather, obscurant, day/night operational radar systems for all environments. Towards this requirement, Rockwell Collins and Sandia National Laboratories have joined together to develop a high performance Synthetic Aperature Radar (SAR) system. With Sandia’s radar experience and Rockwell Collins’ ability to manufacture field-grade reliable products for use in harsh environments, we ensure unmanned/manned vehicle platforms superior radar performance. The radar operates at the Ku band (16.8 GHz) providing 4-inch resolution imagery from a distance of 10 kilometers or 1 meter resolution from 23 km. Images can be used for identification and accurate geo-location of small targets at a geolocation error level of 25 meters. The current system weighs about 27 lbs, with future version downsized to about 18 lbs.