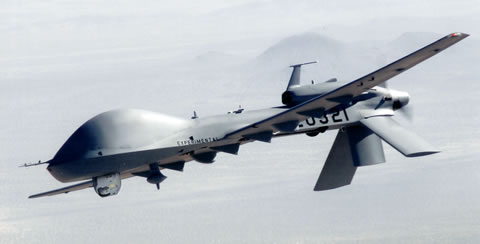 In recent years, as weaponized robots evolved from controversial science fiction into grim reality, particularly in the Middle East skies, new systems are being developed and deployed. The Sky Warrior and Reaper are representative systems pursued by the US Army and Air Force, based on the Predator platform. But some argue that payload capacity may not be the most important factor, as smaller aircraft such as the Sky Raider, designed for field operation could offer superior persistence, resulting in more opportunities to pursue time-critical targets of opportunity.

A nother program dominating the show was the US Navy Broad Area Maritime Search (BAMS), which is expected to select an unmanned platform to augment and replace part of the Navy’s maritime surveillance aircraft in the next decade. The Navy considers three alternatives representing totally different solutions, based on the Global Hawk HALE from Northrop Grumman, the Mariner MALE UAV proposed by Lockheed Martin and General Atomics or an optionally piloted G550 platform from Boeing.

Obtaining High Altitude Long Endurance (HALE) capability is becoming a new trend, with systems becoming more dominant in coming years with the maturation of unmanned platforms, introducing long persistence and ‘near space’ capabilities, replacing satellites being vulnerable to enemy attacks. HALE platforms could also augment existing space and aerial assets, supporting heightened operational needs in certain theaters. Our coverage includes an update on the various developments and missions proposed forNorthrop Grumman’s Global Hawk, the ISIS and FALCON systems from Lockheed martin, the HALL, from Aurora and Boeing, and the Global Observer from Aerovironment.

Between the large HALE systems and the smaller mini and Micro-UAVs, a new range of unmanned aerial systems are evolving, and are expected to define the future tactical systems for years to come. Several classes of unmanned aerial systems (UAS) are considered by the US armed services, among them, two relatively new groups, currently defined as Tier II and Tier III by the US Navy/Marine Corps, the latter considered to be the

more mature. However, just prior to the event, Tier II changed direction, somewhat reshuffling the cards for many participants. AUVSI provided the stage for several companies to display relevant technologies related to the tactical Tier II program. These included the New Integrator, developed by InSitu, as well as the new versions and payloads for the Scan Eagle developed by InSitu and Boeing. Among the new versions unveiled by Boeing were a redesigned Scan Eagle Compressed Carriage (SECC) configuration to be adapted for air insertion.

Other Tier II candidates at the show were the GoldenEye 80 from Aurora, teaming with Northrop Grumman to pursue this program. SpyHawk displayed by MTC and the original designer Arcturus, the KillerBee, presented Swift Engineering teamed with Raytheon to pursue this opportunity while IAI’s I-View 50, the Israeli was newcomer to this program. Elbit Systems’ Skylark II was also on display and could become an attractive option for the

US Marines. Smaller systems, such as the the new Stalker and Desert Hawk III from Lockheed Martin, the Skylark from Elbit Systems, and Skylite from RAFAEL, brought to the show by Advanced Ceramics Research (ACR), which also displayed its own Sky Fox UAV.

They will be used for fire support, armed scout and ISR missions directly supporting maneuver forces. They are designed augmenting or replacing manned helicopter gunships or manned close air support. These Vertical Take-Off and Landing (VTOL) Combat UAVs are expected to follow fielding of FireScout later in the next decade. Such futuristic designs are already under development, including the Excalibur from Aurora, AD-150, proposed by American Dynamics, and the VARIOUS UCAV, a concept for a future lightweight Unmanned Combat Aerial System developed by Lockheed Martin. Northrop Grumman also highlighted its newly selected X-47B UCAS-D vehicle, selected by the US Navy for evaluation for future carrier borne operations.

A unique sensor system for aerial refueling, designed by Cobham was introduced at AUVSI. This sensor is part of an aerial refueling system can be adapted to refuel unmanned aerial systems. The system utilizes the VisNav series 100 Dci sensor system can be applied to any buddy refueling pod and drogue, to accurately tracks measure the drogue position in azimuth and elevation. The system performs over 100 measurements every second and relay the data to the UAV for effective station keeping. The sensor performs under all lighting conditions and can be integrated with existing drogues and buddy store tanks.

Advanced mission control systems were also introduced, including the Virtual Cockpit from Procerus Technologies. Among the new payloads, novel systems included the latest version of the miniature, stabilized U-STAMP payload from Controp.

Israel Aerospace Industries’ Malat division introduced a new systems designed to improve command and control of Unmanned Ground Vehicles (UGVs) which were introduced at AUVSI. Finally, the naval application of unmanned systems was represented by a range of surface vehicles (USV) and sub-surface (UUVs) systems.