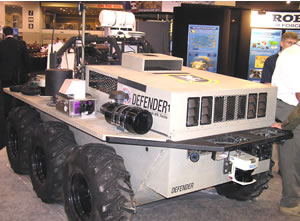 One of the most mature applications of robotic vehicles is perimeter security and sentry missions. At AUVSI, three robotic platforms designed for such missions were displayed or discussed. These included the MDRAS which has already been integrated with operational security systems protecting military facilities in the USA. This robotic vehicle was developed by General Dynamics Robotic Systems, and demonstrated at the Webster Field prior to AUVSI 07. Two additional vehicles were on display at the exhibition – the Defender, a robotic armed security vehicle developed by the Air Force Research Lab (AFRL) and RAPTRS based on John Deer and iRobot’s R-Gator, modified for sentry missions by Navy Space and Naval Warfare Systems Center.

A UGV developed at the US Navy Space and Naval Warfare Systems Center, San Diego is the Recon Adaptive Patrol Tactical Robotic System (RAPTRS) developed at SPAWAR utilizes the John Deer’s R-Gator robotic platform, developed by i-Robot. The vehicle is designed to operate as an unmanned patrol sentry, guarding the base perimeter. Utilizing obstacles and object avoidance algorithms, RAPTRS can operate autonomously over a known terrain; identify obstacles, as well as moving objects such as parked cars, moving cars and people. It is designed to automatically avoid such obstacles, while performing its mission.

The Robotics Development and Research group at the US Air Force Research Laboratory (AFRL) is pursuing a different sentry known as Defender – described as an automated perimeter security (APS) ‘engagement platform’. The Defender is built on a high mobility all terrain vehicle, capable of traveling at a speed of 35 mph., over rough terrain. The vehicle is fitted with color cameras to provide video feedback and road view for the driver. The vehicle can patrol continuously for up to six hours equipped with strobe flashing light system, a speaker microphone system and both lethal and non lethal weapons, comprising pepper spray fogger M-16A2 rifle or M240/249 machine guns.

General Dynamics displayed its Mobile detection Assessment Response System (MDARS), a small diesel powered four wheel vehicle used as a robotic patrol platform. The 3,500 lbs vehicle can carry up to 500 lbs of payload, and operate at a speed up to 20 mph for 16 hours. Its payload comprises a video cameras and two-way audio communications. Its primary mission is to patrol secured areas, tracking potentially dangerous intruders without risking human guards. The robot autonomously and randomly patrols around inventory sensitive warehouses, airfields, ammunition supply depots and port facilities. It can monitor RFID tagged inventories, and determine the status of inventory, batteries and locks while detecting intruders, maintaining visual contact, alerting other forces and conducting first response countermeasures. MDARS was developed for the joint program office force protection systems and, since 2004, has been deployed by civilian guards at the Hawthorne Army Depot. By 2010 the system is expected to support guards operations in six depots in the USA. GDRS is currently developing a naval surface vessel to assume similar roles guarding ports and coastal facilities.

Applied Research Associates (ARA) from the USA and FrontRunner Robotics, a joint venture led by Israel Aerospace Industries, InRob Tech and Zoko Enterprises, both developed robotic applications for the Caterpillar Multi Terrain Loader (MTL). ARA’s demonstrated its Modular Robotic Control System (MRCS) at the AUVSI 07, the MRCS kit equipped a Cat 247B MTL customized for handling heavy unexploded ordnance. The vehicle can be fitted with various attachments, including grappler, IED disruptor, forks, bucket, backhoe, or mission specific sensors. A version of this vehicle is customized for the US Army Nemesis demining vehicle. Nemesis will utilize the robotic vehicle with counter-mine systems automatically detecting anti-personnel and anti-tank mine. For FrontRunner, AUVSI 07 provided the first introduction of the new robotic MTL. A week later, this vehicle was demonstrated at the Force Protection exhibition in the USA (FPED 07). The Israeli MTL Weighs 3.8 tons and can lift up to 1.5 tons or push up to 2.5 tons. The standard tool is the blade, but many other tools can be attached for specific missions. Apart from the standard tools the FrontRunner can also mount a remotely controlled weapon station carrying a machine gun or grenade launchers.

Another UGV program that will soon be operational in Israel is the border patrol robot. The IDF plans to introduce the first version of the autonomous, unmanned border patroller developed by Genius Unmanned Ground Systems company, a joint ventrure between Israel Aerospace Industries and Elbit Systems. The vehicle will be based on a lightweight, all-terrain Jeep Wrangler size platform. A full coverage of this program will soon be published by Defense Update.

Eventually, the Red Owl package will be reduced in size to fit the furure Small Unmanned Ground Vehicle (SUGV) Early designed for the FCS program.

A version of this new unmanned vehicle is the “SUGV Early”, displayed by Boeing and iRobot. Early will weigh about 30 pounds (14 kg), about 30% lighter than the current PacBot. The robot will be able to carry a maximum payload weight of 6 pounds (2.7 kg.) It will be smaller, and fit into standard MOLLE or ALICE back packs. The robot will be waterproof when fully submerged at depths up to 9.8 feet 3 meters. The tracked mobility system, similar to the PacBot’s allows the new robot to climb stairs, drive over rubble or through tunnels and over difficult terrain. It will be powered by standard rechargeable BB2590 military batteries.

Protonex, a fuel cell technology developer introduced at AUVSI a new fuel cell processor and replaceable cartridges, storing 720 W/h each. The ProCore fuel cell system generates 2-4 times the energy density of advanced batteries, significantly extending the run time of ground robots or UAVs and increasing their payload carrying capability. The cell generates full power within 60 seconds from activation, for up to 24 hours. A fuel cell with three fuel cartridges replaces three BA5590 batteries, saving 62% on weight, 50% on size and about 20% on cost per mission.

Command and Control for UGVs

Another control system called V-Star was displayed by Tadiran Systems. This video receiving system, provides the warfighter a single ‘all-in-one’ console, integrating video receiving, support of situational picture buildup, and advanced imagery analysis. Advanced services include correlation between images and maps, video enhancement and image processing, and optional data transmission capability. The system can be utilized as a command and control element for unmanned systems, as well as supporting other remotely controlled sensors. Another remote control device called visually integrated sensor (VIS) was introduced by AnthroTronix. VIS, currently under development, will be used as an imaging and orientation device as well as a display and control to guide unmanned systems.

During a firefight, warfighters are focusing on their surrounding and could be distracted by manually controlling a robot. Various types of control devices introduced at AUVSI07 show some of the more mature systems which could be used to control future robots. AnthroTronix also introduced other innovative devices designed to enable intuitive control of robotic systems and UGVs. Among these were the instrumented glove (iGlove), which operates as an ‘air joystick’, enabling unobtrusive and dexterous control of uunmanned systems, including EOD robots, a patent pending weapon mounted force controller (MFC), and the vibrotactile Feedback belt, (VFB), providing feedback from a remote sensor, indicating directional or situational information by silent, non visual sensory stimulus.

Another application developed by Think-a-Move specifically for the PacBot robotic vehicles family introduces heads-up, hands free control of the system. The new system uses speech commands and tongue signals to control the robot. It relies on a special earpiece that picks distinct sounds created in the ear canal, by tongue movement or whisper. These signals are interpreted and used to replace standard mechanical controls. The system can differentiate between operators, and is effective in noisy environments. 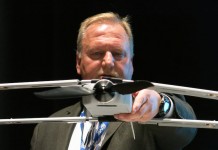