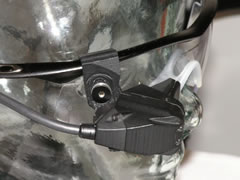 The ‘see-through’ viewer is clipped to standard Oakley M-Frame military approved eyewear with fully adjustable viewing angle allowing the display to be moved above or below the line of sight to increase situational awareness. The device weighs about 50 grams, and is compatible with the left or right eye. It can be operated in daylight or at night, delivering monochrome green SVGA display at a resolution of 800×600 or VGA at 640×480.

A different input device developed by Vuzix Tactical Display Group is a TacEye miniature eyepiece that can be attached to standard goggles to form a 800×600 SVGA head mounted display. The TacEye runs for five hours on a single rechargeable lithium battery, supporting operating modes from full daylight to total darkness, where special filters are used to interface with the goggles and minimize leaks that can indicate the warfighter’s position to the enemy.

The Eurotech Group launched at Soldier Technology 07, the Zypad, a rugged wearable computer built with hardened mechanical design optimized for field uses. The device can be adapted to run at different application levels, such as ‘basic’, mission and ’emergency’. The Zypad supports an integral 640×480 pixel VGA display with 256 colors and an overlaid touch screen. It supports bluetooth Class 2 communications of ZigBee as well as 802.11 wireless LAN. It also integrates a 16 channel GPS receiver and DGPS device, accelerometers, electronic compass and biometric ID.

GPS independent navigation has posed a significant challenge for modern soldier systems, particularly when engaged with urban operations, where GPS coverage is not available. Several systems already offer solutions to this problem. Draper developed the Personal Positioning System (PPS) in response to the US Army requirement for Personal Navigation System, required to provide autonomous, uninterrupted position, location and attitude reference in GPS-challenged signal environment. This robust suite is currently in prototype phase. A similar system is also under development in Israel, by Elbit Systems, for the Israeli Integrated Advanced Soldier (IAS) program. This navigation system will enabling effective navigation in areas where GPS cannot be relied upon. The system uses a combination sensors, such as gyro, compass, accelerometers and barometric pressure sensor, to determine the location of the unit (distance travelled and direction) relative to the last confident GPS reference point. The system is attached to the soldier’s gear and will continue to determine accurate location for several hours after GPS contact is lost. Its accuracy is determined as a function of the distance traveled without GPS reference. It is effective throughout the soldier’s combat activities, including running, walking, crawling or sprinting. The system weighs about 100 grams and is calibrated to reflect the individual soldier’s activities using his personal identification identification tag. 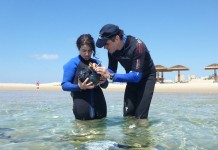