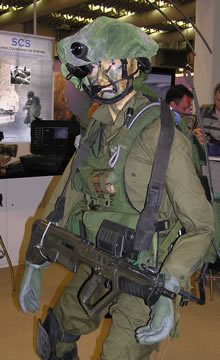 The Israeli Integrated Advanced Soldier (IAS) program is building a ‘dismounted combat team’ which will be able to operate in mounted or dismounted configuration. The equipment used by the troops will be modular, and designed to operate in urban and open terrain. Currently underway the program is led by the Ministry of Defense’s Defense Directorate for Research and Development (DDRD) and Elbit Systems. The program began with a feasibility study launched in 2003 and followed a year later with a combat lab experiment. In 2005, the IDF tested individual combatant gear and conducted the first battalion-size field test highlighting an urban warfare scenario. Following the test, which proved highly successful, the system entered full scale development. The first kits are being delivered and will be used for company and battalion-size exercises, beginning fall 2007 through winter 2008. Following the conclusion of these tests, the system will become operational.

The motivation of the IAS was to establish a common language between combat elements through the command echelons, linking the infantry to the Digital Army Program (DAP) network known as Zayad. Through IAP, commanders will be provided with C4I subsystems enabling them to link their units into the DAP network. While implementation of Zayad among armor, artillery, combat engineering and other elements required extensions of wireless data links and protocols to ‘talk’ with existing command and control elements, the integration with the infantry required fielding an entirely new command and control system, tailored for the ‘human platform’. This system is optimizing target-management and weapons employment at squad, and platoon level, establish mission planning, orientation and navigation tools and introduce data networking between team members and tactical leaders at different command level. Such systems enable the units to rapidly pursue time-critical targets (closure of ‘kill chain’) by small formations, autonomous allocate and assign targets or flexibly team up with other units, throughout the command chain.

The heart of the C4I system used with IAS consists of the Personal Digital Unit (PDU) – a wearable computer coupled with a hand held display, a radio (PRC710), eyepiece display and headsets, mobile Wireless Local Area Network (WLAN) and navigation system. All elements are embedded into a wearable system and armor vest weighing less than five kilograms.

Another element of the IAS is the QuietOps software programmable headset developed by Sylinx. The system supports and controls two radio sets, and is designed with both passive and active noise canceling hearing protection, offering natural hear-through capability while effectively protecting from high dB ‘spikes’ and overpressures caused by nearby gunshots or blasts, which could damage the soldier’s hearing. A side benefit of the QuietOps system is its ability to improve hearing up to ‘super normal’ level, and supporting ‘whisper mode’, both functions could be highly constructive for ambush and covert ops.

The IAS communications gear consists of several systems, including a tactical router (enhanced military wireless LAN) developed by Elbit Systems. The unit, configured as a standard PC card (PCMCIA), carries high capacity data transfer over short range. The system can also utilize the ‘Mountain Rose’ military cellular mobile network, which is dependent on infrastructure. For operations where such infrastructure is not available, tactical combat net radio, such as the PRC710 personal VHF radio (weight less than 750 gr) can be used. Both radios are designed to transfer data at low speed. When multiple gateways are available, IAS will automatically select the most appropriate medium according to the system’s service policy. Furthermore, the entire system will dynamically route each message to reach its destination at the fastest route.

A new navigation system is under development at the DDRD, enabling effective navigation in areas where GPS cannot be relied upon. The system uses a combination sensors, such as gyro, compass, accelerometers and other sensors to determine the location of the unit at an. The system is attached to the soldier’s gear and will continue to determine accurate location for several hours after GPS contact is lost. Its accuracy is determined as a function of the distance traveled without GPS reference. It is effective throughout the soldier’s combat activities, including running, walking, crawling or sprinting.

IAS teams will be equipped with indigenously developed systems for surveillance, reconnaissance and target acquisition, enabling the team to independently and effectively collect intelligence, acquire and pursue time critical targets with high efficiency and accuracy, by its own assets or by employing other ‘networked enabled assets’.

Three types of hand-held observation-and target acquisition systems will be available for AIS commanders at the different tactical levels. Squad leaders and Platoon Sergeants will use the Spatial Orientation System, developed by ITL Optronics. This system has built-in laser rangefinder and digital compass, a monocular x7 day channel, which can also be used with a night viewer. The SOS has an integrated data display and mouse buttons, depicting target range and bearing, navigational aids and ‘leads’ to designated targets or locations, as well as a map display.

Platoon Leaders will use a new target acquisition device, using an uncooled thermal imager with an integrated a laser rangefinder, electronic compass and GPS with an uncooled thermal sight, effective at ranges beyond 1,000 meters. This device can also be used as a hand-held computer display, utilizing its built-in full color super VGA display and mouse buttons. ITL has recently introduced such a system called Cobra, which can do all that at a weight of less than one kilogram, much less than the goal set by the IAS program team (1.6 kg).

Another new device will be used by company and battalion commanders as well as the officers and observers in recce platoons. Coral-CR, designed and built by Elbit Systems is hand-held, cooled, thermal target acquisition system using a 480×384 detector operating in the 3-5 micron band. Using continuous zoom, the system can be used effectively up to five kilometers. As a target acquisition system, Coral-CR integrates a digital magnetic compass, GPS and internal display, enabling effective observation, identification and extraction of target coordinates in real-time. The system weighs 3.4 kg, including batteries.

Other observation devices available for the team include the ‘continuous surveillance system’, an ‘observation arrow’ developed by ODF. The arrow fired from standard M-16s can be fired at a range up to 70 meters, placing the arrow at vantage point, maintaining line of sight with the target. The arrow will continue to operate for four hours, sending video streams picked by its camera, remotely controlled by the controller via two-way link. Another imaging device developed by ODF is the Eyeball, which is thrown into confined room position by an assault team. ODF is also developing a small robot called EyeDrive, which will be able to move, position itself and scout confined spaces through remotely controlled operation.

The IAS evolved from an earlier ‘soldier modernization technology demonstration program launched by the IDF Ground Forces Command program and DDRD. This program, also known as “Infantry 2000”, was managed by Elbit Systems. The Israeli infantry suite comprised of a helmet and weapon mounted sensors, weapon mounted fire control system, head and weapon mounted display and sights, and pouch mounted wearable computer, fitted with navigation systems, data and synthesized voice communications. The Infantry 2000 program focused on the ‘soldier as a system’ concept, seeking a suite that will enable the future soldier to navigate, communicate and locate and engage targets, with superior firepower, lethality and protection. The suite would also include augmented lethality weapons, such as the IMI Tavor-2, firing the Refaim anti-personnel air-burst weapon. At present, IAD pursue a different approach, facilitating effective dismounted command and control while other aspects of ‘Infantry 2000’ are dealt with as part of regular modernization cycles.