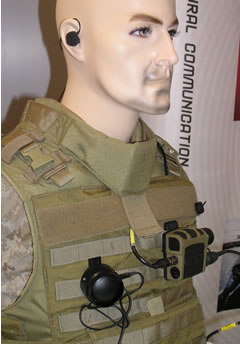 Several companies introduced advanced personel radios at At Soldier Technology 2007. Among the systems on display were the RF-7800S-TR UHF set from Harris, the latest version of Spearnet from ITT. Rockwell Collins introduced its Flexnet waveform. Selex demonstrated its H4855 PRR system, which also included several add-ons, such as the command and control module. Another system discussed on the briefings was the Microlight from Raytheon, which was used by the British Army during its field assessment tests of the FIST systems.

For individual combat role, radio Harris is offering the RF-7800S-TR UHF set, a secure personal team radio. The radio operates over a distance of 1-2 km in open terrain, 500-800 meters in urban area and about half a kilometer in dense jungle. It runs on eight alkaline or rechargeable batteries supporting eight hours of continuous use. It carries full duplex digital voice and data communications, using an independent wireless network that does not require infrastructure or backbone support. The system supports 14 programmable preset networks, each supporting ‘talk groups’ – full duplex voice conferences allowing several speakers to talk simultaneously on the network while to an unlimited number of listeners. This results in a natural, dynamic communications exchange unrestricted by traditional limitations of half-duplex radio. The network uses priority based functions providing leaders the ability to break-in, ensuring critical orders are received even when the network is active. The data enabled radio has a built-in SPS GPS receiver, enabling automatic position tracking and messaging services. It connect to standard computing devices, such as digital cameras, PDAs and laptops via standard USB. Communication security is supported by built-in Harris Citadel II hardware or Advanced Encryption Standard (AES) encryption.

ITT is offering the Spearnet team member radio operating in the 1.2 GHz, 2.4 GHz or 4.9 GHz frequency bands. The radio has an integrated AES COMSEC encryption module. Spearnet communicates uses Direct Sequence Spread Spectrum for optimal operation in an urban environment, supporting a maximum 6 Mbps burst rate or 1.5 Mbps in sustained transmissions. Rates are reduced through longer communications lasting over several frequency hops, for example, five hops will reduce he data rate to 500 kbps. The Spearnet uses a self-organizing, self-healing, ad-hoc network carrying secure voice, data and video communications. For data communications the radio supports a tactical LAN on the move that does not require a server to exchange messaging. Each radio has an embedded GPS, and Linux operating system for radio hosted applications.

Several companies displayed hearing protection devices, some integrated into the headset gear. Two competitors, the Norwegian company NACRE and US based Silynx introduced two parallel products which even have similar names – QuietPro and

QuietOps, both offering a combination of headset, advanced hearing protection Voice Activation radio Transmission (VOX) and programmable control for tactical radio sets. QuietPro, introduced by NACRE is the more established system, that has already been integrated with the Marine Corps’ personnel radio communicators and Special Operations’ PRC-148 MBITR radio systems and the German Bundeswehr iDZ soldier modernization program. The QuietOps from Silynx was introduced later, and therefore was developed with more flexible programmability with radio systems. The system is used with the Israeli Integrated Advanced Soldier (IAS) program and is also offered worldwide. According to NACRE, over 24,000 units have already been ordered. The system uses a digital signal processor to facilitate automatic, adaptive digital hearing protection by passive and active noise reduction. Using both passive and active means, QuietPro’s can achieve 34-42 dB attenuation (depending in frequency). By attenuating ambient noises and canceling excessive acoustic peaks and impulses, resulting from nearby running engine, explosions and gun shots, QuietPro helps protecting the soldier’s hearing. An in-ear microphone and loudspeaker support simultaneous operation on two radio networks while an adaptive, digital talk-through and directional hearing facilitates a ‘bionic ear’, capable of localizing sounds and maximizing hearing sensitivity at specific directions.

Besides using their radios, today’s soldiers are required to operate a number of electronic devices – each with its own functionality and controls all that, without taking hands off the weapon and eyes off the performing task. Thales Australia is developing a rifle input control (RIC) interface, that can be adaptable to various rifles and devices, enabling warfighters to easily control weapon or helmet mounted systems with intuitive commands. The system is based on a patented system invented by Kord Defence. The weapon mounted pushbutton controller provides fast, one-hand and ‘eyes free’ access control of a range of devices directly from the weapon. RIC’s three- or five-button controller can be used to generate ‘chordic’ combinations that could comfortably execute eight different commands such as activating a rangefinder, changing a sight or thermal imager’s field of view , sending a picture or ‘clicking’ a radio by momentarily pressing the ‘transmit’ push to talk button. The device is attaches to the front of the rifle and can be operated by left or right handed users.