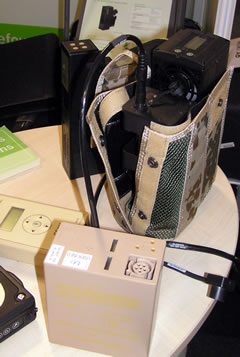 Energy capacity of batteries means a great deal to ground forces. Heavy, expensive, non-rechargeable military batteries are slowing warfighting efforts in Iraq and Afghanistan as well as weighing down soldiers in critical combat situations. For a typical 72 hour mission, requiring 20 Watts average power, each foot soldier now needs up to 27 lbs of rechargeable batteries (or 18 pounds of non-rechargeable batteries). Some platoons have designated individual soldiers to act as “battery mules” for the platoon. From ruggedized computers to communications systems to GPS to remote sensing and video, soldiers are carrying cumbersome loads of batteries to power these devices. And this power source problem is only growing, as the dismounted soldier continues to require more advanced and “power hungry” devices. Logistically, batteries have been a major problem during the Iraq war as the two domestic suppliers of key batteries could not keep up with the increasing demand. The operation of the war was delayed while battery supplies were being replenished by the long and arduous supply chain.

To overcome these limitations, special operations, long range patrols and ambushes are planning their missions around available “battery energy capacity cycles”. Missions are set to these very limited battery lifetimes, requiring frequent resupply missions, with the potential risk involved, to deliver fresh power to forward-deployed forces. Any contribution toward reducing weight and increasing the power density of batteries becomes an important asset to the military, but even more relevant are the new possibilities to ‘harvest’ and generate power in the field.

The growing need for electrical power, and high diversity of power sources used with standard equipment, leads to a considerable waste of power resources, as teams are required to carry extra batteries for each type of equipment. Lacking centralized power distribution capability, batteries available for one system cannot be used by another device. Although many systems are already operating on standard batteries, form factors and other requirements frequently dictate the use of non- standard batteries, consequently limiting the warfighter’s use of power reserves.

A solution to this problem could be provided by new, portable field chargers producing power from methanol or hydrogen powered fuel cell. Fuel cells have also evolved in recent years to become lightweight and compact enough to be considered for future soldier systems. Yet, none have been integrated into an infantry combat suite as current technology is considered imature for field use. SInce most fuel cells are generating a considerable amount of heat and also have distinctive acoustic signature, they cannot be relied upon as a primary power source but are already considered for field recharging where their benefits outweigh their limitations.

Felin system uses several power sources to support the core system, radios and various wearable sensors. The kit uses two batteries – a high capacity pack and a ‘standard pack’ providing minimal power required for mission critical systems.The high capacity pack is worn by the soldier in the combat vest. This flat, waterproof lithium ion rechargeable battery weighs about 600 grams and supplies 75 Wh supporting the core FELIN system. A smaller and compact Li-Ion battery weighing only 180 grams is the “Standard Pack’ delivers 18.5 Wh, powering the peripheral units and sensors (helmet and weapon). Both batteries are designed to sustain the FELIN system for up to 72 hours. The batteries use built in microprocessor and data-bus (SMBUS) to accurately monitor the remaining power level while the FELIN system is running and optimize charging cycles accordingly.

When the teams are mounted aboard their vehicles, they use the vehicle’s power to recharge their systems. The charger is part of the FELIN vehicle integration kit, to be installed on infantry support vehicles. Team members are provided with individual power outlets to charge their systems without removing their FELIN combat vests. Spare batteries can also be charged with the vehicle’s collective battery charger. Most vehicles can be equipped with two collective battery chargers providing team members with 12 – 24 battery sets.

A different power system was designed for the FIST system by ABSL. The companydeveloped its own version of modern soldier system’s power source. The core of these systems is the new 4.3 kg four channel ‘smart charger’, which can be connected to various DC power sources such as vehicle batteries, fuel cells or other batteries, to tap any power source available in the field. It provides a fast recharge cycle, delivering with 80% of charging in less than 60 minutes. The four channel DC charger supports the smaller soldier portable charger, which can charge any secondary smart battery. This lightweight charger (weight: 340 grams) is carried by the individual soldier enabling the warfighter to tap any power resource available in the field, including a solar array, field chargers and generators, car batteries or residual power remaining in other smart batteries. It supports charging rate of 7.4Ah enough to provide 80% of the charging in les than 60 minutes. It can perform the charging simultaneously with functioning as stand-alone supply functionality. The battery carried as part of the soldier system has an electronic processor to monitor the state-of charge and communicate with other batteries, the system’s computer and the soldier portable charger to manage available power resources.

Fuel cells can operate independently, but when used as hybrid systems with rechargeable Li-Ion batteries, they offer many advantages. The battery is used primarily as power storage device, delivering peak power over a limited, predictable period of time. The fuel cell is a power producer that continuously feeds power at a constant nominal output level. Batteries have a wider operating temperature level, especially at the sub-zero regime, they can operate while submerged and operate quietly while the fuel cell generally produce a low humming noise and is unable to operate underwater.

A typical fuel cell is the XX25 from UltraCell. It provides an uninterrupted power to field computer and communications equipment supplying enough power to provide for a 72 hour mission at a total weight of only nine pounds (4.5 kg). This is about a third of the weight of batteries consumed ion such missions. The system uses the Reformed methanol Fuel Cell (RMFC) system, offering higher power density compared with the Direct Methanol Fuel Cell (DMFC) system.

The system consumes fuel cartridges containing 250cc a mixture of 76% methanol and 33% water. Each cartridge weighs only 12.4 ounces (351 grams) sustaining operation for nine hours. The fuel cell system delivers 25 watts continuous power, at 12V. The system weighs about 2.7 pounds (1.24 kg) and, when activated, runs through a start-up phase of about 20 minutes.

SFC is developing a wearable fuel cell system called M-25 is currently under development. This system will weigh about 0.9 kg and will be designed to provide sustained 25watts with peaks of up to 80 watts, running at higher efficiency levels (up to 30%) from 300 ml Methanol cartridges. developed offer unique attributes for such missions, including low emissions of noise and heat, making them attractive for covert operations of special forces and deep, intelligence missions. DMFC used in hybrid battery configuration offers significant weight savings compared to batteries. For example, on a 72 hour mission, the DMFC hybrid system offers up to 80% weight comprising a minimal load of batteries and DMFC charger, compared with the full load of rechargeable batteries required for the mission duration.

SFC also offers a power manager device, powering several devices including battery chargers, laptop computers, observation systems or radios from a single fuel cell. The device can also hook into a car battery to tap available power sources. The system can inputs 10 – 28 VDC and manages different voltage ranges (10 – 24 Volt) and currents up to 6,5 A to match different systems requirements. It can harvest power from all available sources, including batteries and vehicle’s power. The company also developed a special power manager for the FFW leader, supporting various types of batteries (BB-2590 and Li-145), and mission extenders, including fuel cells, zinc-air batteries and solar panels.

At AUVSI 07 Protonex unveiled its new high capacity fuel cell offering unique advantages for military applications. The ProCore series of fuel cell is designed for optimized output power of 30 watts at 17 volt. The system is based on the fuel cell processor and replaceable cartridges, storing 720 W/h each. The cartridge contains Sodium Borohydride fuel in dry state and, upon being mixed with water it generates hydrogen consumed by the fuel cell to generate electricity. Protonex licensed the hydrogen generation technology from Millennium Cell Inc. This fuel cell is offered in various forms, powering unmanned ground vehicles and electrically powered unmanned aerial systems.

A different form of energy supply is the harvesting of power from sources available in the field. One such application, the harvesting of power by Remote Aparatus Power System (RAPS) is one option considered by the US Air Force Special Operations Command for spec-ops units. This invention allows special forces to harvest power from any low voltage (<600 V) transmission line, for battery recharging. The simple device uses a metal clamp thrown up over the power line, feeding AC electrical power to the AC/DC power supply which converts it to the level consumed by the electronic systems or battery chargers.