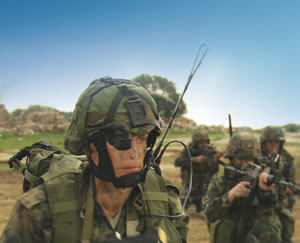 Soldier Technology 2007 conference and exhibition, organized by the Worldwide Business Research (WBR) group porovided an excellent view into some of the leading soldier modernization programs worldwide. Through the briefings, the common denominators and key differences between programs became evident. Two speakers from the US – Col. Richard Hanson, EO Soldier Land Warrior PM, briefing via video from the US and Mark Richter, program manager, USMC Expeditionary Rifle Squad (MERS)lectured about their respective programs. Lack of commonality between systems was clearly apparent. No common standards are available or even suggested among NATO members, resulting in excessive development and procurement cost for all armies. Disagreement about the goal of such systems exists even among various US service branches. While the Army’s program is leaning toward technologies, empowering each and every warfighter and combat leader, the USMC is aiming at improving the capabilities and performance of the squad as a whole.

Col. Hensen suggested establishing interoperability between the various warrior programs, under development among all allied forces. “If we don’t buy together and fund together – some countries will not be able to afford it” said Hensen. He expects Land Warrior (LW) to restart next year with the renewed funding directed by the Senate. “Affordability will be the key [to the system success]” said Hensen.

Hansen’s briefing covered the progress with the various warrior programs, as well as the rapid fielding initiative. Land Warrior kits were modified significantly after the 4/9 test & evaluation. Since the suite is modular, it was redesigned to better match troop’s preference, moving the radio and batteries onto the soldier’s back, while the computer, navigator and controller unit (known as ‘fusion’) is mounted on the side, clearing more space for ammunition and grenades. Such repositioning became possible with the mounted warrior kit, since these warfighters usually operate close to their Stryker armored vehicles. Currently, over 200 land warrior suites are operational in Iraq with the 42nd Brigade Combat Team (BCT). Operational lessons gathered during the current employment are expected to be instrumental for further progress of future programs. The focus is on empowering the small unit call for fire; collect and relay target data to command post and fire units and accelerate medical support calls and treatment under combat conditions. Further development of the system was suspended this year due funding cuts brought to the program’s cancellation by the Army. However, the Senate Armed Services Committee added $80 million to the FY 09 program to resurrect the program, as it migrates into the Army’s Future Combat Systems (FCS).

Mark Richter, PM Marine Expeditionary Rifle Squad (MERS) outlined the USMC view of the enhanced rifle infantry squad, a combat formation reduced from a complex 13-man unit to a more maneuverable, streamlined eight men formation. Richter also discussed the rapid fielding of new equipment, including the fielding of night vision devices, personal role radio for all squad members, equipping commanders at various levels with additional computing devices. The concept of “platoon in a box” was also discussed, outlining some innovative logistical solutions enabling the support and deployment of such flexible concepts. “The squad as a system” is the USMC approach to future warrior systems. Richter regards power to be the most critical issue. The future concept is the Enhanced / Distributed Operations. Enabling the marine unit to control and dominate a larger area – placing more experienced Non Commissioned Officers (NCO) in key positions in the squad and platoon, embedding intelligence cells at Forward Operating Bases (FOB) and company or platoon formations, issuing four digital cameras to each squad, enabling troops to collect intelligence while on routine missions and process it on image enhancement gear while at the FOB. The cameras are quiet and effective even in darkness, as images can be enhanced to show details invisible on regular mode. 200 digital cameras in the battalion become a powerful visual intelligence asset that must be managed effectively.

The FIST program, currently in the assessment phase, has gone through several phases of trials, which highlighted some technical issues with equipment subsystems. These tests demonstrated how the FIST will integrate within the British Army’s Bowman network and work with other systems currently under planning stage. Recent tests validated the improvements made with weapons and firepower of the fire team. John Foley, FIST program Technical Director at Thales briefed on the recent achievements, detailing the composition of FIST SA equipment, the test’s outline ad some of the lessons learned. Col. A.G. Bain, British Army Force Development Headquarters Infantry added some insights on development and fielding of new infantry gear and weapons, among them a new 60 mm portable mortar, replacing the aging 52mm hand held mortar, and an all-terrain load carrier, that will offload some of the cargo currently carried by British warfighters.

The Israeli Integrated Advanced Soldier (IAS) program is building a ‘dismounted combat team’ to be operated within the infantry battalion level. These battalions will be able to operate in mounted or dismounted operations, while commanders able to receive and make decisions based on an updated ‘live’ situational picture presenting both hostile and friendly forces. The equipment used by the troops will be modular, and designed to operate in urban and open terrain. Currently underway the program is led by the Ministry of Defense’s Defense Directorate for Research and Development (DDRD) and Elbit Systems.

The program began with a feasibility study launched in 2003 and followed a year later with a combat lab experiment. In 2005, the IDF tested individual combatant gear and conducted the first battalion-size field test highlighting an urban warfare scenario. Following the test, which proved highly successful, the system entered full scale development. The first kits are being delivered and will be used for company and battalion-size exercises, beginning fall 2007 through winter 2008. Following the conclusion of these tests, the system will become operational with the first combat platoon for an operational pilot.