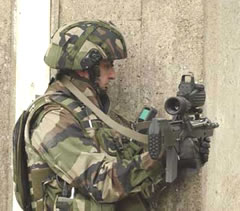 FELIN is a modular infantry combat suite, offering efficient ergonomics, autonomy and weight saving. In March 2004 Sagem Defense Systems won the French Defense R&D Directorate (DGA) contract to develop and produce up to 30,000 infantry combat suits, to be fielded with all French Army active infantry regiments by 2010 as part of the future air/ground system of systems called BOA.

The total contract worth is estimated at 800 million Euro. The program considers two versions to be developed. Felin V1 system will introduce an integrated equipment and communications for the infantryman, and Felin V2, which will provide more far-reaching innovations. 358 units are to be delivered by the first half of 2007, equipping three combat units scheduled to begin technical and operational evaluation of the systems by the second half of the year.

Sagem is expected to begin serial production and delivery of Felin V1 systems in 2008. the introduction of Felin V2 is expected b y 2015. Both systems are based on common building blocks such as observation, fire control, navigation, position locating and communications systems.

Superior resistance, comfort and stealth will enable the soldier to move faster with extra protection. The uniforms are designed for sufficient ventilation, and are fabricated from fire retardant materials, replacing current fire retardant coveralls used by AFV crews. Torso protection will be improved with removable modular combat jacket which will have significantly larger protection area, provided by soft armor, rather than hard ballistic protection plates. Naturally, it will retain the capability to add supplemented ceramic inserts for extra protection of critical areas, when required by the mission or threat level. The garment’s structure will be modular, allowing the soldier to adjust the weight according to the mission. The suite will also be provided in a special Nuclear, Radiological, Bacteriological and Chemical protection configuration. Two wired networks are integrated into the clothing and load bearing gear – the electrical power bus and digital network, transferring data, video and linking to GPS/radio antennae. The system uses a combination of Li-ion rechargeable batteries and chargers, supporting up to 72 hours of operation. Recharging will be provided by vehicle mounted chargers or dismounted fuel-cell chargers.

The FELIN infantryman will use an upgraded FAMAS assault rifle which has been fitted with image intensifying (I2) sight and a wireless video camera that relay the sight images over wireless local network to either the torso or helmet displays, or directly to transmits them to the platoon commander or team leader. The commander’s FAMAS will be equipped with thermal weapon sights. IR optronics will also increase the effectiveness of the Minimi machine gun and the FRF2 sniper rifle. FELIN V1 will field with four types of sights – a reflex day/night sight for the FAMAS, a day/night sight for Minimi, an improved long-range day/night (I2) sight integrated with a laser rangefinder for the FR-F2 sniper rifle and hand held imager, integrated with GPS, LRF and Digital Magnetic Compass (DMC) for commanders.

The helmet offers enhanced protection with an outer layer that contains a wide-angle day/night camera improving dismounted soldier’s mobility in both day and night, relaying images to the helmet ocular, and thorax display unit. Using the standard headgear, the soldier will be able to detect a human target at 150 meters and identify it at a range of 70 meters. The suite will comprise a variety of electro-optical sensors, including light-intensifying optronics, uncooled thermal camera (weapon mounted or hand-held multifunction binocular configuration). A headband mounted osteophone will eliminate the use of microphone and earphones for voice communications. This device enables the employment of passive ear protection without impairing communications and spatial orientation. By separating the osteophone headband from the helmet, a modular functional cabling organization is established: audio/data in the headband, video/sight on the helmet, fitted with optronic devices. All elements are interconnected through the digital bus and contribute to the Infantryman’s Information Network (RIF) through the “Portable Electronic Platform” embedded in the clothing. The helmet mounted day/night microcamera will offer 50 degrees field of view.

The wearable computer (Portable Electronic Platform – PEP) and the wearable network form the hub of FELIN system, built around a high speed processor integrated with a high speed digital open bus network (FireWire IEEE 1394 standard is currently supported) which manages the energy resources and signal exchange between the different elements, including weapon sights, displays, communications and navigations assembly. The system is powered by a high performance electrical energy source integrated into the infantryman’s load carrying gear. The application software driving the system supports all the system’s elements, and also has some emergency defaults, providing nominal position and emergency functions for critical actions such as communications and reporting. The computer is connected to a man-machine interface unit enabling the soldier to control the system and carry out complex operations such as firing around a corner or see through obstacles.

Section and group leaders will also be supplied with a hand held tablet PC designated SIT-COMDE (“portable terminal information system for the dismounted soldier”) The system will support the commander by displaying situational pictures and maps and exchange encrypted information with other command post.

All Felin equipped infantrymen will use a small personal radio (RIF) transmitting voice and data communication. The RIF will be functional both in mounted or dismounted operations enabling GPS position tracking and information sharing within the squad and platoon. The communication bandwidth provided by the RIF is sufficient to pass operational graphics, imagery, maps and video sequences between team members and back to the higher echelon. They will operate with either all-in-one or sub-network architecture and interface with the fourth generation radio (PR4G) which remains the link between the dismounted platoon and the vehicles. As it is separated from the PEP computer, the radio will operate even in the event of computer breakdown.

The portable digital communications between the section members, their leaders and their superiors and related elements (land vehicles, helicopters, drones and robots) will be the cornerstone of the Felin system. This communications will comprise voice, data and video. Transmission of video information is of fundamental importance for the French planners, enabling warfighters to relay images they capture on their sights to their superior commanders. Sagem will establish this capability based on its experience with commercial mobile telephony and computing. Each section commander will be equipped with multifunction, un-cooled thermal binoculars used for day/night observation and targeting. Infantry leaders and specialized section commanders will get the “Offboard Fighter Terminal Information System (SIT COMDE), a palm-sized computer used for tactical situation assessment. The SIT will display images, maps with overlaid symbology, and will be able to exchange encrypted messages with other commanders and higher echelons.

The FELIN electronic ensemble will be powered by two rechargeable Li-ion batteries will be used to ensure that the soldier can operate the system for 24 hours once dismounted. The unit will also be equipped with a collective fuel-cell based battery charger, which will sustain the team for two more days of continuous dismounted operation. Batteries can be recharged using collective devices. These will be integrated into the futuristic EBRC, AMX-10P, VBCI and VAB armored vehicles, in support of FELIN equipped infantry teams.