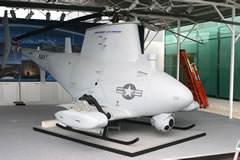 Rotary-wing UAVs are also maturing rapidly, with the growing demand for UAVs to support naval vessels operating in the littorals, as well as on the open sea. Several versions of Vertical Take-Off and Landing (VTOL) drones are currently designed for operation on board frigates and corvettes, as well as submarines.

One of the competitions for shipboard UAV currently heating up in Europe, is the UK Ministry of Defence plan to launch the maritime VTOL UAV. Among the contenders expected to participate are Northrop Grumman offering the MQ-8B Fire Scout, EADS offering systems based on the ORCA or SHARC and Thales UK, teamed with the Austrian company Schiebel offering the S-100 Camcopter. Similar programs are expected to follow in Germany and France and later, in Spain and Italy.

Sharc, a fully autonomous demonstrator VSTOL UAV developed by EADS Defense & Security (DS) made its first flight just prior the Paris Airshow. In this flight the 200 kg unmanned rotary wing vehicle tested the coaxial dual-rotor propulsion and overall stability, demonstrating some of its impressive flight characteristics. The Sharc is designed for autonomous operations from ship deck, offering highly stable flight characteristics and large payload capacity. Its dual rotor configuration provides 30% more lift, compared to conventional main rotor and tail boom designs. Its egg shaped oval fuselage is 2.50 meter long, 0.70 m wide and 1.2 meter high. Its maximum takeoff weight is 190 kg, carrying 60 kg of mission equipment. The helicopter is equipped with redundant flight control unit, a laser altimeter, mission control system and datalinks. The counter-rotating rotors are designed to operate with electrical actuators, thus eliminating all hydraulic components on board. One of the advanced capabilities introduced in the Sharc’s flight control is the attitude stability, improving the helicopter’s capability to perform ship roll compensation correction, a prerequisite for autonomous deck landing. Typical payloads considered for the Sharc include maritime search radar, SAR, and electro-optical payloads. The vehicle’s skin can be used, in part, to accommodate flat panel antennae for communications and radar.

Another rotary wing UAV on display here was the FireScout, developed by Northrop Grumman. The US Navy and Army are exercising a Joint Acquisition strategy of the MQ-8B to maximize commonality between the two services and drive down costs. Operational evaluation by the US Navy is planned for 2008 The Navy has nine MQ-8Bs on order from Northrop Grumman. The Army version could fly by 2010 and be fielded around 2014 as part of the Future Combat Systems brigade combat team (BCT). Its modular mission package will include communications relays, airborne surveillance and target acquisition systems.