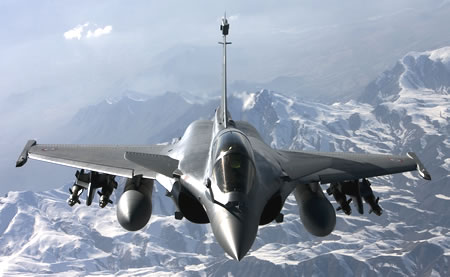 If you thought Le Bourget will excite you with brand new fighters, you will have wasted your time. All we have seen here were the familiar (though still very impressive) displays of the Rafale, Typhoon, F/A-18 and F-16. Even the JSF mockup did not miss the static park, as it travels with Lockheed Martin from one show to another. Should you want to see the real thing – the X-35B short-takeoff and vertical-landing (STOVL) is one of the new exhibits at the Smithsonian museum’s Steven F. Udvar-Hazy Center near the Dulles airport in Virginia, US.

Yet, the business of aerospace is not about showing off these expensive toys, but actually selling them, keep them flying and upgrading them to best match and win combat over adversaries. The Paris debut of the Gripen Demo – a newly established partnership, led by Saab, reflected this approach. Saab announced here its teaming with a group of leading aerospace companies to develop a demonstrator of the next generation of the Swedish future fighter, ensuring Gripen remains a viable fighter well beyond 2040. The program is expected to answer the future needs of current and potential customers, enhancing technologies used in current JAS-39C/Ds.

Elsewhere in Europe, Dassault Rafale and Eurofighter are maturing parallel lines, reflected by operational requirements and foreign competitions. Rafale, obviously the ‘king of the show’, gave an impressive aerial demonstration, with its static display presenting a wide range of weapons highlighting its ‘omnirole’ approach. Official endorsement of planned upgrades is securing its future for many years. Recent participation in combat operations over Afghanistan positioned Rafale in a more attractive position to win future prospects. One of the potential clients could be Morroco, already negotiating procurement of 15 aircraft for several years. Although Rafale has not won any export sale yet, strong backing by the French Air Force and Navy continues to push the program forward – the latest announcement of the signature of a development contract for the Active Electronic Active Array (AESA) for the RBE2 radar will make the Rafale more appealing on the export market. Thales is currently integrating the radar on board the Rafale and expects to move into serial production of the radar by late 2010.

With recent orders from Saudi-Arabia and, and the long delayed procurement by Austria, Eurofighter is leading over Dassault, at least related to international competitions. “We are delivering the benchmark-setting capability to our partner air forces. Our motivation is delivering a customer-satisfying product both now and for the decades to come.” Said Aloysius Rauen, CEO Eurofighter GmbH at a press conference in Le Bourget. “Capability Delivery” was central to the Eurofighter presence at Le Bourget, as reflected by the “We Deliver!” banner. An important element of this ‘delivery’ is the so called ‘capability enhancement‘ currently underway to provide the parnter countries, and particularly the RAF with ground attack capability.

The centerpiece of Boeing’s IDS defense showcase was the flight display of the latest version of the F/A-18 – the F model (Super Hornet). Two versions are currently in production – the single-seat E model and the two-seat F model. This carrier capable aircraft provides a versatile platform for a wide range of missions, including air superiority, day/night strike with precision-guided weapons, fighter escort, close air support, suppression of enemy air defense, maritime strike, reconnaissance, forward air control and tanker. The aircraft is currently in production for the US Navy and Australian Air Force. Boeing IDS is hopeful the aircraft will find future markets, especially in those countries currently flying the F/A-18 Hornet, such as Finland, Switzerland, Malaysia and Kuwait. Other prospective markets include Japan and India. On the static display, Boeing has also shown its F-15E strike fighter currently marketed as “Super eagle” with an AESA radar improved (all digital) Electronic CounterMeasures (ECM) and modern avionics. Potential clients for Boeing’s Super Eagles include Saudi-Arabia, South Korea, Japan and Singapore.

Apart for the stunning demonstration of the MiG-29OVT, Russian military hardware was limited to models, leaving much of the mystery and surprises (including the long awaited Su-35) to the upcoming MAKS Airshow to be held this August near Moscow. Nevertheless, some of the companies were generally open to discuss the details of some of the new aircraft, engines and systems. One of the systems on display was a Russian 4+ generation cockpit, believed to relate to the Su-35. Another aircraft on display here was the M-346, which is based on the Russian Yak-130.