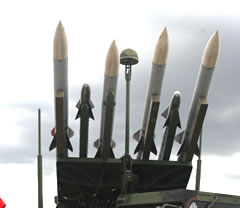 The highly potent Russian systems represented here were merely models and posters, including the long-range S-300PMU2 Favorit and Antey-2500. These are becoming high demanded items worldwide, especially in Middle East nations, like Syria and Iran. Sources at Almaz-Antey, developers of the Favorit prefer not to comment on these prospects, but follow-up on President Putin’s offers to support the establishment of pan-European missile defense saying: “The Favorit system may serve as a potential foundation for European non-strategic anti-missile defense system”.

The Russians are also offering the Buk-M2E, enhanced export versions of the medium-range SA-17, including a new launcher-loader vehicle carrying eight missiles (four ready to fire missiles plus four loaded in storage, on rails ready for ‘hot swap’).

Thales displayed the Crotale Mk3 system, a point defense air-defense system proposed for life extension of existing some 300 Crotale systems currently operational worldwide. (Crotales are operating in France, Greece, Finland, Oman and South Korea.) Crotale was developed as an autonomous system, and the new Mk3 is adding platform flexibility, as well as full integration and coordination into network-centric and lower tier systems, such as MANPADS and VSHORAD systems. The system introduces new interceptors (a combination of VT-1 hyper velocity missiles, reaching up to 15km. Crotale Mk3 system employs the new Shirka 3D multibeam surveillance radar derived from the Thales Netherlands SMART-S Mk2 search radar, and engagement control system which also integrates a thermal imager, enabling passive target acquisition. The new operator console displays the target on screen for visual identification before firing and continues to track it through the engagement to confirm the target kill.

Elta’s EL/M-2084 Multi-Mission Radar (MMR) is an advanced phased array radar capable in performing artillery and air defense missions. It detects a wide range of flying objects with low radar cross section (RCS), including artillery shells and rockets, even in the presence of ground clutter and electromagnetic interference. For ballistic targets the radar can spot and track hundreds of targets simultaneously, and pinpoint artillery fire sources at a range of 100 km. The system will also calculate the anticipated impact points for each target, alerting the locations that might be affected by the threat. The MMR is being integrated with the RAFAEL Iron Cap rocket intercepting system developed under an Israel MOD contract. When employed in support of air defense missions, the MMR detects and tracks all types of airborne targets, including aircraft, helicopters, cruise missiles and UAVs. The radar is capable of detecting aircraft and missile targets at ranges up to 350km, depending on altitude.

MMR will be the principal sensor for the Spyder MR medium range surface to air missile system, developed by RAFAEL. It is also expected to support the ground-based variant of IAI’s Barak 8 naval and land air defense systems.
Another new radar on display was the deployable version of the RAT31 from Selex, Sistemi. The RAT31 DL/M (Deployable Air Defense) radar is transported by two vehicles, one carrying the radar and the other carrying the shelter. Employing a solid-state phased-array, this 3D surveillance radar covers an effective range (line of sight) of over 500 km and operates in the L band. The system can be installed for operation within 15 minutes, even on unprepared sites. The remotely controlled system is equipped with all support elements to guarantee self sufficiency for long operating periods. The DL/M radar was recently sold to the German Air Force. RAT31 radars are operational with eight armies, six of them of NATO countries.

Among the asymmetric threats, Improvised Explosive Devices (IED) and rockets and mortars (RAM) are posing the most significant threats, particularly to forces engaged in the asymmetric conflict known as ‘global war on terror’ (GWOT). Addressing the growing interest in RAM Countermeasures (RAM-C), Raytheon presented one of the systems currently under development at the Paris Air Show. Known as the Laser Area Defense System (LADS), the system utilizes the land based radar-directed Phalanx gun system called ‘Centurion’ developed by Raytheon. The US Army plans to field up to 50 such systems, Raytheon is proposing a laser-based version of the system. The LADS’ effector uses a beam director coupled instead of the gun. The effector is coupled to the laser source via fiber-laser. The system is powered by a diesel generator. During the system demonstration phase conducted in 2006, LADS destroyed static 60mm mortar bombs at a range of more than 500 meters. LADS can augment existing Centurion systems, extending their reach and response rate with ‘speed of light’ C-RAM capability. Initial systems could be ready for production next year.

Another laser-based system using high-power laser to defeat rockets and bombs is the Skyguard, developed by Northrop Grumman produces demonstrated its ability to cope with artillery, mortar and rockets. It can defeat the most sophisticated missiles, including multi-color advanced seekers, laser beam riders and CLOS guided, destroying any threat within seconds. A single fire unit will be able to will be integrated into existing air defense systems and protect an area in a 15 km radius around an asset, with a capability of defeating MANPADS or UAVs up to their typical altitude limits. Skyguard has a target acquisition, tracking and high power laser. It is based on mature chemical laser technology, and has a dynamic engagement zones and safe areas, and proven system of friendly fire avoidance. According to Northrop Grumman, a Skyguard system could be deployed within 24 months.